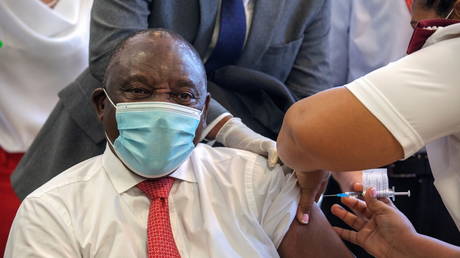 South Africa’s president has been vaccinated with Johnson & Johnson’s Covid-19 jab, joining thousands of healthcare workers taking part in a trial to test the efficacy of the single-dose vaccine against the local virus variant.

President Cyril Ramaphosa urged his fellow South Africans to come forward and get a Covid-19 vaccine when it’s their turn in an online video of himself receiving the jab on Wednesday.

Taking the vaccine was quick, easy and not so painful. I urge all our healthcare workers to register to receive their vaccinations as they are our first line of defence against the coronavirus pandemic. #WeChooseVacciNation #VaccineforSouthAfrica ?? pic.twitter.com/11tyl1f9Xs

Ramaphosa described the procedure as “quick, easy and not so painful”, and said that he had opted to take it so as to help “allay any fears that people may have” over it.

The inoculation makes the president one of the first people to receive Johnson & Johnson’s vaccine outside of clinical trial conditions.

In a series of tweets on Wednesday, Ramaphosa announced that the first batch of Johnson & Johnson’s vaccines had arrived in South Africa and would be administered, as planned, to healthcare workers later in the day.

The shots, which have not yet been approved for widespread use anywhere in the world, will be initially used as part of a trial in which no placebos are given. So far, more than 380,000 healthcare workers in South Africa have registered to receive the jab.

The decision to start using the Johnson & Johnson vaccine comes as the country looks to offload its 1 million AstraZeneca doses. Pretoria turned its back on the AstraZeneca vaccine in early February after a small-scale study led by a South African university suggested that the jab was ineffective against the dominant strain of Covid-19 in the country.

AstraZeneca has questioned the thoroughness of the study in which none of the 2,000 participants were hospitalized with severe symptoms or died, but 39 eventually caught the virus – 19 from the vaccine group and 20 from the placebo group. The study prompted Pretoria to halt the jab’s rollout.

On Tuesday, South Africa announced it would attempt to recoup some of its costs by “sharing” the jab with other countries in Africa.