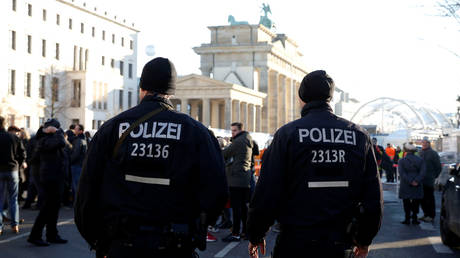 German police and special forces have raided more than 25 properties in Berlin and Brandenburg in an early morning offensive against the country’s most notorious crime group. Two people were arrested.

Thursday morning’s operation was primarily aimed at members of the large Arab crime family, Remmo, who are being investigated as part of a crackdown on organized crime.

The Berlin public prosecutor’s office is investigating them for violating laws on the distribution of firearms, large-scale drug trafficking and violent crime. The federal tax authorities are also involved in the investigation concerning allegations of tax fraud against members of the family.

Police said two men had been arrested during the raids and another suspect escaped. The raid also targeted Chechen clans in the region who were involved in brutal clashes with the Remmo family in November 2020. Authorities feared a gang war could break out after the Chechens attacked members of the Remmo family and they then retaliated.

The two groups reportedly agreed to a truce after Syrian-Lebanese professional boxer Manuel Charr mediated negotiations between them.

According to Der Spiegel, German authorities had been analyzing data from EncroChat for nearly a year, a discontinued app dubbed “WhatsApp for gangsters,” by criminologists.

French security authorities managed to infiltrate an EncroChat server in spring 2020 and secretly read the chat traffic of tens of thousands of participants for months.