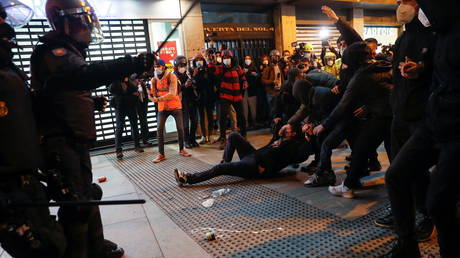 Spain’s prime minister Pedro Sanchez has finally condemned violent protests over the detention of a rapper after three nights of unrest in the country and mounting criticism from MPs about his silence.

Around 80 people have been arrested and over 100 injured so far in violent clashes between Spanish police and individuals protesting the arrest of rapper Pablo Hasel, who is now serving a nine-month prison sentence for writing a song that criticized former King Juan Carlos I, as well as for tweets that law enforcement said glorified defunct terrorist groups.

Speaking on Friday, Prime Minister Pedro Sanchez condemned the violent behavior and declared that his administration will confront all forms of unrest that occur in the country, stating that “democracy never, ever justifies violence.”

Violence is an attack on democracy. Consequently the Spanish government will confront any kind of violence.

Sanchez had been facing mounting criticism from members of Spain’s parliament, with the conservative opposition party accusing him of siding with his Podemos party, which has backed protestors.

Protestors gathered in cities throughout Spain to oppose the detention, believing it to be a violation of the right to free speech. Sanchez’s far-left Unidas Podemos party has filed a petition calling for the rapper to be given a “total pardon”.

Hasel was captured after police raided the University of Lleida in Catalonia a week after the rapper was supposed to hand himself over to police to begin his prison sentence. After being arrested, he was seen being removed from the building shouting, “They will never silence us. Death to the fascist state.”