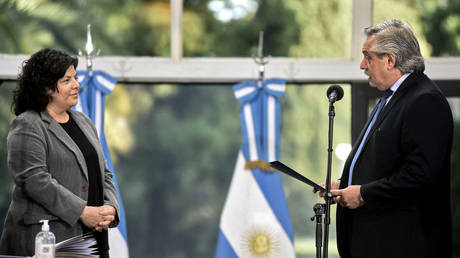 Argentina has a new health minister after a “VIP vaccination” scandal, which marred its Covid-19 immunization campaign and dragged her former boss under. Ironically, it started as a well-intentioned bid to promote vaccination.

Dr. Carla Vizzotti was sworn in on Saturday as Argentina’s new health minister, taking over from her former superior, Gines Gonzalez Garcia. The 48-year-old physician and epidemiologist took her oath with a promise to sort out the Covid-19 immunization program and to carry it out swiftly and equitably. She said she intends to give “each Argentinian the peace of mind that all vaccines are administered according to precise sanitary criteria.”

She was referring to a scandal that toppled Garcia on Friday, courtesy of his long-time acquaintance, journalist and radio host Horacio Verbitsky. During his morning program on the same day he announced that he had changed his opinion about Sputnik V, the Russian vaccine that is being used in Argentina’s inoculation effort. He said he decided to get vaccinated with it rather than wait until the Oxford/Astrazeneca formula is available in Argentina.

The change of heart came after nine of his family members, from a year-old baby to a septuagenarian, got infected with Covid-19 and one of them succumbed to it, Verbitsky explained. So, he called his “old friend” the health minister and got instructions on how to get the jab. Before he could follow it and go to a hospital in Buenos Aires, he was contacted by an assistant, who told him he could be vaccinated directly at the ministry instead.

Verbitsky is a veteran political activist whose anti-corruption campaigns in the 1960s won him the nickname ‘The Dog.’ In the 1970s he was a guerrilla fighter and spy, working against the US-backed dictatorship that was engaged in the so-called Dirty War against the leftist opposition in Argentina. The 79-year-old is considered a political ally of the current left-leaning government of President Alberto Fernandez.

Verbitsky’s comments, which were obviously meant to inspire public trust in the vaccine, instead sparked accusations of cronyism. Many saw the affair as proof of claims that privileged figures close to the government can secretly jump the line and get their shots early. In his resignation statement released later in the day, Garcia blamed “confusion” in his office at a time when he was out of the capital for the “VIP vaccination.”

The health ministry said Verbitsky had been given the status of “strategic personnel,” a category that includes essential workers, security forces, teachers and some officials. Members of this grouping are supposed to be vaccinated after medics, who were given the top priority by the health ministry. Local media says Verbitsky was one of several people who got included on the list despite not qualifying.

The journalist himself apologized for jumping the line on Saturday, telling his audience he didn’t realize he was doing something wrong. “The most decent thing I can think of is to admit [wrongdoing] and ask for forgiveness,” he said.

A similar incident occurred earlier this month in Peru, when Pilar Mazzetti resigned her job as health minister after the country’s former president Martin Vizcarra was accused of having jumped the vaccination line. The former official managed to get himself and his wife enrolled for the clinical trial of the Chinese vaccine made by Sinopharm and allegedly ensured that both got the real drug rather than a placebo.