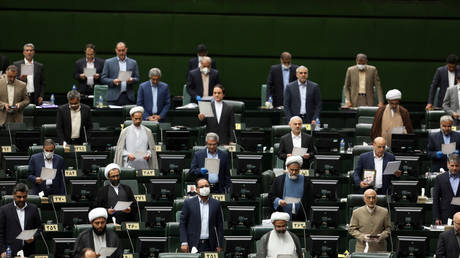 A majority of Iranian lawmakers voted on Monday to pass a motion condemning the country’s president, Hassan Rouhani, for agreeing a deal between his government and the UN nuclear watchdog, and called for his prosecution.

The damning resolution in Iran’s parliament also stated that a report by the National Security and Foreign Policy Commission on the deal made with the International Atomic Energy Agency (IAEA) would be sent to the nation’s judiciary, who will review it to decide if it complies with an existing law.

Legislators opposed Rouhani’s move as they believe it is a “clear violation” of a bill that was passed on December 2 that required the country to increase its nuclear activities if the Iran nuclear deal was not fully reinstated and sanctions imposed by the Trump administration were not removed.

Despite the legal requirement that the government strip away the broad authority the IAEA inspectors have thus far enjoyed if the deadline of 23 February is not met, Rouhani’s deal with the UN bypasses that for the next few months.

As the inspectors won’t be able to gather information themselves, Iran has agreed to record the monitoring data the UN would normally collect itself. If the US returns to the Iran nuclear deal, this will be handed over to UN inspectors. If US sanctions have not been removed within three months, however, all the data retained over that period by Iran will be destroyed.

With Iran’s Supreme National Security Council claiming the deal with the IAEA is compliant with the law, and Iranian lawmakers arguing it’s a violation of that law, the judiciary will now be asked to decide which is the correct legal position.

While it’s not yet clear what punishment the legislature believes Rouhani should face, the MPs claim that, as “the aforementioned law recognizes the president as the person in charge of implementing it,” he should face criminal charges if the judiciary agrees the new deal is illegal.