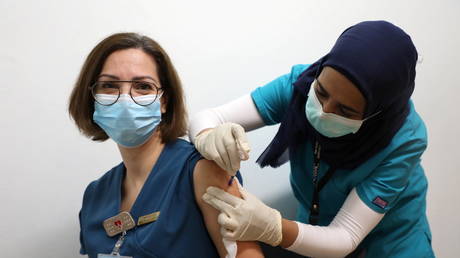 Millions of dollars in World Bank funding for Lebanon’s Covid-19 vaccine rollout could be halted due to alleged queue-jumping for the jab by the country’s MPs, the financial institution’s regional director said on Tuesday.

According to local media, Lebanese MPs and parliamentary staff over age 75 were to be vaccinated on Tuesday without needing to register in advance, although journalists were not to be allowed to observe.

“This is not in line with the national plan agreed with [the] World Bank,” the organization’s Middle East chief, Saroj Kumar Jha, said on Twitter.

“Upon confirmation of violation, [the] World Bank may suspend financing for vaccines and support for Covid-19 response across Lebanon… please register and wait for your turn,” he added.

Lebanon’s vaccination drive against Covid-19 began in February and the country has so far taken delivery of around 60,000 doses of the Pfizer-BioNTech jab from the World Bank.

The World Bank provides aid to poverty-hit nations such as Lebanon, which it has provided $34 million in emergency financing to vaccinate over 2 million people.

However, the bank warned the Lebanese government against nepotism – a concern similarly raised by demonstrators at anti-corruption protests across the country in recent weeks.

Relatives of some of the 200 people killed in the Beirut Port explosion on August 4 have been venting their fury after the judge leading the inquiry into the blast was removed from his post.

Judge Fadi Sawan had charged the former Lebanese caretaker PM Hassan Diab and three ministers with negligence over the explosion before he was taken off the case.

Protests have also been sparked by delays in Lebanese banks sending money to students studying abroad, as well as a military court’s decision to charge some demonstrators with “terrorism.”