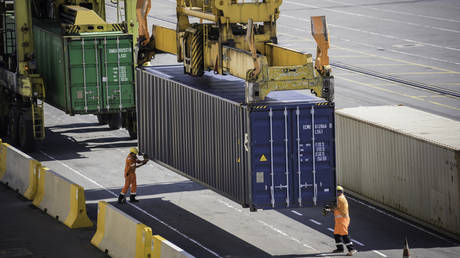 A record-setting 23 tons (16,174 kilos) of cocaine destined for the Netherlands has been seized at ports in Germany and Belgium, Dutch authorities announced after a joint operation involving law enforcement in the three countries.

The shipments were seized earlier this month, but the investigation was revealed on Wednesday after police announced they’d arrested a 28-year-old Dutch man at an address in Vlaardingen, South Holland in connection with the record haul.

According to law enforcement estimates, the drugs could have a street trade value of roughly €600 million ($493 million).

The drugs were being smuggled inside 1,728 cans of filler – a material used to plug cracks and holes in walls – on a container ship in Hamburg. The vessel was set to depart for the Netherlands next.

The suspect was arrested after being listed as a consignee in a note in the shipment, and a police investigation found he had been involved in the delivery of 11 similar containers that arrived at Antwerp port in Belgium, which apparently conveyed items such as wood and mackerel.

The haul marks the largest seizure of cocaine destined for the Netherlands ever recorded by European authorities, and comes after cooperation by police, public prosecutors and customs officials in Belgium, Germany and the Netherlands.