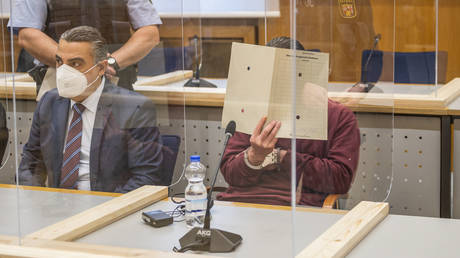 A 44-year-old former Syrian official was sentenced to jail time by a German court for crimes committed in his home country. German justice claimed jurisdiction based on universal application of law against serious crimes.

The sentence passed in the city of Koblenz marks the first time the principle of universal jurisdiction was used in Germany against a person who represented Damascus in the protracted Syrian conflict. The defendant, Eyad al-Gharib, was found guilty of being an accessory to crimes against humanity for helping the government to crack down against mass protests in 2011.

As an agent of Syria’s General Intelligence Directorate, he rounded up anti-government activists in the Douma neighborhood of the Syrian capital and brought them to a clandestine detention center to be interrogated, tortured and sometimes killed, German prosecutors said. His superior at the time, identified as Anwar Raslan, is currently standing trial in Germany in a related case, with a verdict expected to arrive in October.

Al-Gharib’s defense pleaded for his acquittal, arguing that disobeying Raslan’s orders could have resulted in his own execution. The sentence of four years and six months is one year shorter than what the prosecution asked from the court.

Both former Syrian intelligence officials were arrested in Germany in 2019 in a coordinated police operation. They defected from the Syrian government in the early years of the conflict and spent some time in other nations before arriving in the European country as asylum seekers in 2014 and 2018. Some of their former victims recognized them and alerted the authorities.

Opponents of the Syrian government hope that the successful prosecution would set a precedent and pave the way for holding accountable other people who had allegedly committed crimes on behalf of Damascus and tried to find refuge on foreign soil.

The case is not the first where Germany used universal jurisdiction to go after Syrian criminals. In 2017, Suliman Al-S., a suspected former member of the Syrian jihadist group Jabhat al-Nusra, was sentenced by a court in Stuttgart to three years and six months for his part in the 2013 abduction of Canadian national Carl Campeau. The man was taken in a Damascus suburb and held hostage for eight months before he managed to escape.

Suliman Al-S. served as Campeau’s guard and was tried as an accessory for war crimes. The relatively lenient sentence was later increased to four years and nine months, after an appeal by the prosecution.

Universal jurisdiction in Germany was introduced in 2002 and is reserved for the most serious offenses, including genocide, crimes against humanity and war crimes.