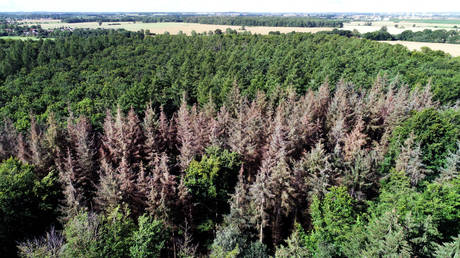 Fires, storms, droughts and bark beetle infestations have damaged German forests so badly that they are now in their worst condition in four decades, the country’s Agriculture Minister Julia Kloeckner said on Wednesday.

The country’s 2020 Forest Condition Report of 10,000 trees has revealed that a record 1.7 percent of trees died between 2019 and 2020, nearly 10 times the average number of trees that perish each year.

Only 21 percent of trees in the annual survey did not see defoliation in their crown or canopy – a sign a tree is unhealthy – which is the worst result since records began in 1984.

“Crown condition is like a medical thermometer, it shows how the trees are doing. The survey shows: our forests are sick,” said Kloeckner.

The minister said German forests are “feeling the effects of climate change” and that the country needs them for climate protection, stressing that trees are “air and water purifiers, carbon dioxide reservoirs.”

Germany’s forests cover 11.4 million hectares – a third of its total area – and are a source of huge pride for Germans.

Bark beetles were cited as the main cause of the deaths, due to a dry summer that allowed the pests to burrow deep into the trees, cutting off their natural functions and slowly killing them.

However, fires, storms and droughts due to a changing climate were also touted as reasons for the damage.

Tree scientist Dr. Nicole Wellbrock from the Thuenen Institute, who contributed to the report, said that 2020 was not an anomaly and that the pollution and degradation of forest nutrients would be a continuing trend due to climate change.

The German government has promised €1.5 billion ($1.8 billion) in funding for forest owners and managers to help them clear damage, plant new trees and prepare for the effects of climate change.