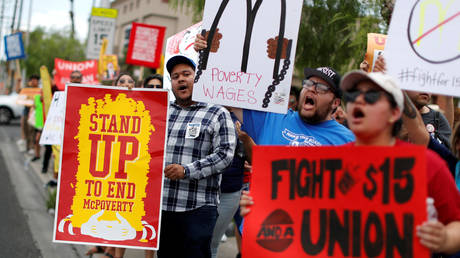 Fast food giant McDonald’s has reportedly set up a team of ‘intelligence analysts’ to monitor and gather data on employees suspected of being members of the ‘Fight For $15’ movement, which seeks a minimum wage hike.

The damning revelation on the alleged in-house espionage practiced by McDonald’s was published by Vice’s Motherboard on Wednesday. The company has set up a team of “intelligence analysts in the Chicago and London offices,” according to the report.

The spy team has been tasked with keeping an eye on activities of Fight For $15 organizers, trying to deduce “which McDonald’s workers are active in the movement.” The movement seeking a hike in the minimum wage for the company’s workers emerged in 2012, spilling out of the US into several other countries since then. McDonald’s, however, has repeatedly rejected calls for an increase, pointing to the US federal minimum wage which still stands at $7.25 per hour.

McDonald’s officially promised to “not use our resources, including lobbyists or staff, to oppose minimum wage increases at the federal, state or local levels” in 2019, stating, however, that the increases should be phased in. The policy change only affected corporate-owned restaurants, as US regulators ruled the company was not responsible for the labor practices of its franchisees.

The report suggests that the spying has primarily been performed through social media, with the analysts searching through profiles of workers. The stated goal of the team of analysts was to find out: “how and where will FF$15 attack the brand.”

“The idea was to figure out their strategy, counter it, and find out where the key players are, and who they know,” a former McDonald’s corporate employee told Motherboard.

The movement has repeatedly staged rallies in front of the chain’s restaurants and mass walk-outs, urging the fast food giant to pay up. The corporation apparently perceives wage protests as open hostility, an internal McDonald’s report obtained by Motherboard shows.

“Protesters have gathered in parking lots, placed signs on their cars while passing through parking lots and drive-thrus, blocked traffic, and parked billboard trucks with FF$15 messaging outside [McDonald’s HQ] and restaurant locations,” the document titled ‘Ongoing FF$15 Activity Against McDonald’s During the COVID-19 Crisis’ reads, bemoaning the lack of notice.

There has been little to no notice ahead of protest events, with strike letters often being sent on the day of the event or even while the event is taking place.

The corporate spy team is said to have utilized unspecified “social media monitoring tools” to mine data and collect information from the employees’ accounts. The operation has also allegedly involved the creation of “fake Facebook personas” to spy on workers.

“This story is laden with false information, pulling together disparate pieces of information to build a sensationalist narrative that is inaccurate and misleading,” McDonald’s spokesperson Jesse Lewin told Motherboard.

At the same time, Lewin admitted the company indeed has an intelligence division, but argued it was “not unusual for a large multinational corporation like ours.” The corporate spies, however, are apparently not tasked with watching the company’s employees, and “none of the business intelligence work is related to labor relations.”

“For example, we have a responsibility to monitor for labor protest activity that may have the intended purpose to disrupt restaurant operations that could put crew and customer safety at risk,” Lewin explained.