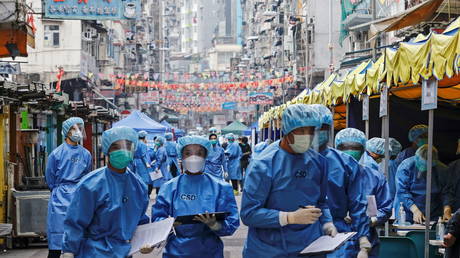 The Foreign Correspondents’ Club of China (FCCC) has accused Beijing of using Covid-19 as “yet another way to control journalists,” curbing visas and surveilling reporters. China says it’s protecting its citizens from the virus.

The FCCC, which is the professional association of Beijing-based journalists reporting on China, has argued that 2020 had seen a “rapid decline in media freedom,” implemented under the cover of measures that were used to combat the spread of coronavirus.

In its annual report released on Monday the press group claimed these restrictions were placed on journalists to prevent them from providing an accurate picture of ongoing events in the country, as well as in other areas that are politically sensitive for Beijing, such as Tibet.

As China’s propaganda machine struggled to regain control of the narrative around this public health disaster, foreign press outlets were repeatedly obstructed.

The FCCC found that 42 percent of journalists who responded to the report had been denied access to or forced to leave areas because of claims of health concerns and threats of enforced quarantine. Some members of the media also argued that reporters had been subject to restrictions that did not apply to other individuals in the country, including contact tracing and checkpoints, which “created additional opportunities for Chinese authorities to gather data and surveil foreign journalists and their sources.”

China has previously refuted criticism of its strict Covid-19 restrictions, which have impacted diplomats, officials from the World Health Organization, and journalists entering and traveling around the country. Beijing believes tight controls, quarantines, and testing are required to protect its citizens from new variants of the virus that could quickly spread throughout China.

In January, China’s state-run press agency Xinhua announced that the country would be enforcing a ‘14+7+7’ policy that would oblige anyone entering the country to spend 14 days in hotel quarantine, seven days in home quarantine, and another seven days being monitored at home with limits on the ability to meet with others in public.