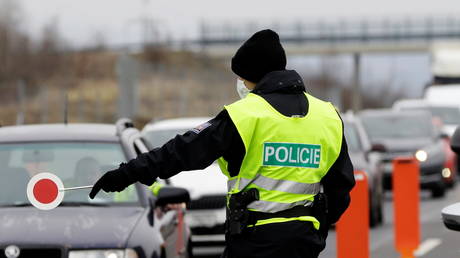 Some 30,000 police and soldiers have been deployed across the Czech Republic and at 500 security checkpoints set up in a bid to enforce toughened coronavirus rules, as the country battles the world’s worst infection rate.

The new measures, introduced on Monday, ban Czechs from leaving their district except for essential reasons, like caring for vulnerable people or working.

Officers are allowed to conduct random spot checks and people are required to produce personal documentation on request, with fines of up to 20,000 Czech koruna ($920) for rule-breakers.

Higher-grade face masks are also now mandatory in many areas, while 9pm to 5am curfews have been introduced, and people may only exercise – or walk their dogs – in their local municipality.

The heightened measures come after Prime Minister Andrej Babis declared a new 30-day state of emergency at the weekend, set to last until March 28.

The PM warned of the immense strain that further infections would place on hospitals, saying that without the additional clampdown, “our healthcare system will simply not be able to withstand it.”

Babis also confirmed that the more infectious South African variant of the virus has been detected in the country.

This is a worry for Czech health chiefs, as the British variant has already ripped through the country and pushed up the number of infections.

On Sunday, the Czech healthcare system saw a near-record day, with 7,049 Covid-19 patients in hospital, of which 1,507 were in intensive care.

The country’s seven-day infection rate was 109.82 per 100,000 people – the worst per capita in the world, according to data from Johns Hopkins University.

The country, which has a population of 10.7 million, has posted at least 1.24 million Covid-19 cases in total to date and 20,469 deaths related to the virus.