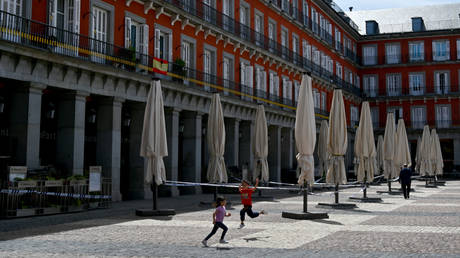 The Spanish border with Portugal will remain largely closed until at least March 16, Madrid confirmed on Monday, even as it began to ease some regional restrictions implemented to slow the spread of Covid-19.

The restrictions have been in place along the 1,200km-long border since January 29, with only Spanish residents or Schengen-area travelers who are en route to their homes allowed to cross.

The Spanish government has begun to ease regional Covid lockdown regulations that imposed overnight curfews and restrictions on restaurants, bars, and shops, as well as limiting the number of people who could meet up. From Monday, people living in Valencia, Catalonia, and some areas of Madrid woke up to loosened rules that allow some malls and stores to re-open. The restrictions had been put in place in late October.

In Barcelona, bars and restaurants will be allowed to open for brief periods up to 1pm daily, and smaller stores can open again, but strict controls remain in place on capacity. In Valencia, parks and public spaces will be re-opened, but at 50 percent of normal capacity, while in some areas of Madrid, small groups can meet at outdoor cafés.

Spain has recorded 3.19 million cases and more than 69,000 deaths from Covid-19. Its vaccination program is gathering pace, with two million people receiving at least their first dose of one of the three vaccines approved for use in the country. The AstraZeneca vaccine is being administered only to those under 55 years of age.