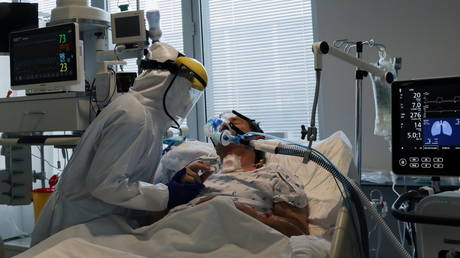 One of Israel’s top medical centers has published a worrying study about the long-term effects of the coronavirus, revealing that 45-year-old former patients performed during physical tests as if they were aged 80.

Some 30 people aged 45, on average, took part in the survey carried out by the Beilinson Medical Center in Petah Tikva, the Times of Israel reported.

Three months after they had been officially cleared of the disease, the former Covid-19 patients were asked to undertake a series of simple physical tests, and performed rather poorly.

One of their tasks was to walk for six minutes, and Covid-19 survivors could cover only about 450 meters in this time, while the average for their age group is some 700 meters.

Their performance was no better when it came to squats. The participants of the study managed to stand up and sit down 14 times during half a minute, missing the norm by a whole 16 squats.

The researchers said the results of the former Covid-19 patients were similar to the fitness levels usually encountered in 80-year-olds.

While the cohort of 30 people is a relatively small sample for a study, the findings of the Israeli team echoed similar research undertaken in China.

That research, published in the Lancet medical journal in January, was based on data drawn from more than 1,700 people in Wuhan with an average age of 57.

The Chinese study subjects underwent physical trials half a year after their recovery from the infection, with 63 percent found still to be showing fatigue or muscle weakness.

As for the six-minute walking test, up to 29 percent of the participants were unable to hit even the lower limit of the normal range for their age group. Other complications encountered by those surveyed included sleeping difficulties, anxiety, and depression.