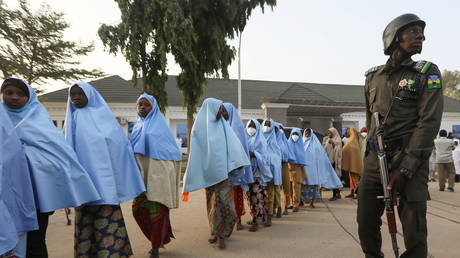 The governor of Zamfara state has said that all 279 girls who were abducted from the Government Girls’ Science Secondary School (GGSS) in Jangebe last Friday have been released by their captors, largely unharmed.

“Alhamdulillah! It gladdens my heart to announce the release of the abducted students of GGSS Jangebe from captivity,” Zamfara State Governor Bello Matawalle tweeted on Tuesday morning, accompanied by a photo of state-owned minibuses.

Alhamdulillah! It gladdens my heart to announce the release of the abducted students of GGSS Jangebe from captivity. This follows the scaling of several hurdles laid against our efforts. I enjoin all well-meaning Nigerians to rejoice with us as our daughters are now safe. pic.twitter.com/YKfHoUuiXP

Local media reported that most of the girls appeared unharmed, but at least a dozen were taken to a hospital for treatment. Many of the girls were without shoes and had been forced to walk great distances by their captors.

On Friday, the police said that 317 girls had been kidnapped but today’s announcement by the governor confirmed that all 279 were freed.

Zamfara state spokesman Sulaiman Tanau Anka told Reuters that a number of girls had escaped into the bush during the assault and that only 279 were held hostage over the weekend.

Nigerian President Muhammadu Buhari tweeted his satisfaction that the girls had been released, but called on local people to share intelligence on the kidnappers to bring an end to “these grim and heartbreaking incidents.”

“This news bring overwhelming joy. I am pleased that their ordeal has come to a happy end without any incident,” Buhari wrote.

One father, who saw seven daughters taken by the gunmen on Friday, said the incident would not deter him from sending his girls to school and receiving a good education.

Such kidnappings are happening with alarming frequency. The preceding week, gunmen attacked a boys’ school in neighboring Niger State and abducted 42 people. More than 300 boys were kidnapped from a school in Kankara in December, during President Buhari’s visit to his home state.