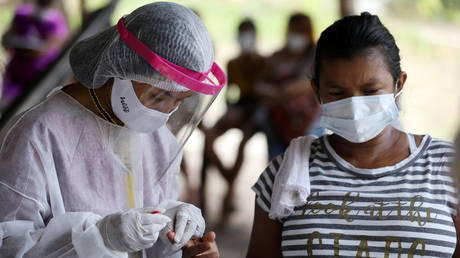 Up to 61 percent of people who previously had Covid-19 could be reinfected with the highly contagious Brazilian ‘P1’ variant, a new study has found. Scientists say it’s too early to know if it’s harder for vaccines to tackle.

Scientists studying people in the Brazilian city of Manaus, where the P1 variant first emerged, found that out of 100 people who had recovered from their Covid-19 illness, between 25 and 61 were susceptible to catching the P1 strain.

Brazil’s Amazon region had suffered very high infection rates last year, but was then hit by a second wave of the virus between December 2020 and January 2021, which researchers believe may have been caused by the P1 lineage.

They said P1 has a “unique constellation” of 17 mutations in the coronavirus spike protein, including K417T, E484K and N501Y, which are all associated with increased binding to human cells – meaning they are likely to be more contagious.

The scientists estimate that the Brazil variant is up to 1.4 to 2.2 times more transmissible than early forms of the virus.

However, Nuno Faria, a virus expert at Imperial College London who co-led the research, told a media briefing on Tuesday that researchers did not yet know the impact the variant may have on the efficacy of Covid-19 vaccines.

“There’s no concluding evidence really to suggest at this point that the current vaccines won’t work against P1. I think [the vaccines] will at least protect us against disease, and possibly also against infection,” he said.

The P1 lineage has been identified in 20 countries globally, including the UK, where three cases have been discovered in England and three in Scotland.

One of the six cases still remains unaccounted-for and the government has launched a search operation to trace the individual, who failed to fill out a contact form when they took their Covid-19 test.

On Tuesday, UK Health Secretary Matt Hancock told MPs in the House of Commons that the government had narrowed its search for the mystery person to 379 households in a single area of England.