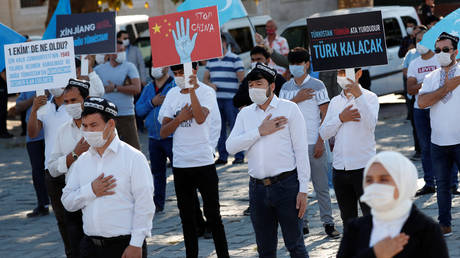 China has said that the door to Xinjiang “is always open” for UN High Commissioner Michelle Bachelet, after she claimed Muslim Uighurs are suffering arbitrary detention and ill-treatment in the area.

The statement was made on Tuesday by the Chinese delegation to the UN Human Rights Council in Geneva in response to comments by Bachelet claiming an independent investigation needs to be conducted into claims of human rights violations against Uighur Muslims.

The Chinese authorities offered to facilitate a visit from the high commissioner to Xinjiang but warned that the trip must be about providing “cooperation,” and not be part of a “so-called investigation based on guilty before proven.”

The door to Xinjiang is always open, and we welcome the high commissioner to visit Xinjiang

China has faced criticism from international bodies, including the UN, over allegations of its mistreatment of Muslim Uighurs across the country, with suggestions that the religious group is being targeted and faces restrictions on its civil and political freedoms.

Bachelet’s remarks on Friday pointed towards reports of arbitrary detention, ill-treatment and forced labor of Uighurs, citing “information that is in the public domain.” She called for an “independent and comprehensive assessment” of the situation in the region.

This is the second time that China has publicly offered an invitation to the UN high commissioner. Back in June 2019, Chen Xu, China’s ambassador to Geneva, said that Bachelet would be welcome to “pay a visit to China, including a trip to Xinjiang, to see [for] herself.” However, no such trip has taken place to date.