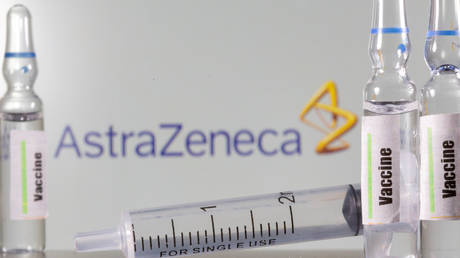 The French health authorities have granted permission for the Oxford-AstraZeneca Covid vaccine to be given to people aged 65 to 75. However, a much lower number of doses of the jab than projected have been administered so far.

On Tuesday, a French health ministry official said that only 24 percent of Covid-19 vaccines delivered to France by AstraZeneca had been administered, amid low confidence in the jab and its exclusion from the country’s main inoculation campaign. There had been concerns that there was insufficient trial data to support giving the jab to the over-65s.

The target for administering the shot in France, already approved for the under-65s, had been set at 80 to 85 percent.

“It is true that we are facing issues with the AstraZeneca vaccine,” the official said without elaborating, according to Reuters. “Now, there has been recent positive news … and we are confident it will find its place,” the official added, referencing recent research from Scotland that shows its impact on reducing from Covid-19.

The preprint data from Scotland showed that, four weeks after the first doses of the AstraZeneca vaccine were administered, that risk fell by up to 94 percent. The study showed that the Pfizer vaccine reduced hospitalizations by up to 85 percent. Meanwhile on Monday, Public Health England said in a preprint paper that the AstraZeneca jab was more than 80 percent effective at preventing hospitalization among the over-80s.

Despite the rather high-profile spat between EU leaders and the British-Swedish drugs firm in January and February concerning supply delays, of the 1.137 million AstraZeneca doses delivered to France, only 273,000 had been administered as of February 27, according to data from its Ministry of Health.

In late February, the Financial Times also noted low levels of AstraZeneca vaccine usage across the EU, claiming that less than a quarter of the company’s jabs delivered to Germany had been administered as of February 25. By comparison, the utilization of the Covid-19 vaccine produced by Pfizer was 96 percent, and by Moderna 72 percent.

On Monday, French Minister of Health Olivier Véran said that use of the AstraZeneca vaccine would be expanded to those aged between 65 and 75 who have existing health problems. He referenced the positive but not yet peer-reviewed research from Scotland.

Accompanying the minister, Alain Fischer, coordinator of France’s vaccine strategy, countered potential uncertainties about the UK-backed jab by saying it should not be considered “a second-rate vaccine.”

“It is quite effective. It has its place in the arsenal of vaccinations,” he noted.