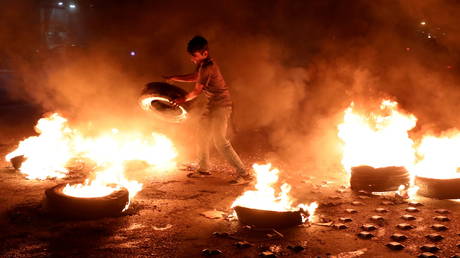 Fresh protests have erupted in Lebanon on Tuesday, following the record crash of the Lebanese pound against the US dollar on the black market, as the country lurches further into crisis.

Demonstrators blocked off several of the main thoroughfares in the capital Beirut by burning tires and dumpsters, causing traffic jams, including on roads leading to the airport, according to Lebanon’s National News Agency.

There were also reports that, in the city of Sidon, south of Beirut, protesters forced the closure of bureau de change offices, as they vented their anger at the plummeting exchange rates.

Footage and images shared on social media from Beirut showed garbage containers being torched, traffic being blocked, and protesters shouting about the deteriorating living conditions.

There were also reports of protests breaking out in other parts of the country.

On Tuesday, the midday black market exchange rate was almost 10,000 Lebanese pounds to the dollar, meaning that the minimum monthly wage in Lebanon would be the equivalent of just $68.

More people have been turning to the black market to access the more stable US dollar in the past several months due to Lebanon’s banking crisis and increasingly devaluing currency.

The exchange rate has since settled to around 1,520 pounds to the dollar, but a lack of physical cash has meant fuel imports have been delayed and there have been power cuts of up to 12 hours a day in some areas.

Protesters, including many of the relatives of some of the 200 people killed in the August 4 port explosion in Beirut last year, have taken to Lebanon’s streets repeatedly throughout February.

Public anger grew after Lebanese judge Fadi Sawan, who had charged the country’s outgoing PM and three ex-ministers with negligence over the blast, was removed from the investigation into the disaster.

Thousands of people were injured and left homeless by the explosion, which was caused by nearly 3,000 tonnes of ammonium nitrate – an explosive chemical commonly used in fertilizer – was stored in unsafe conditions at the port for years.

Before the blast and the Covid-19 pandemic, Lebanon was already battling a deep-seated financial crisis, in part caused by corruption.

The country’s $90 billion of national debt is around 170 percent of its GDP, one of the highest deficits in the world. Around half of Lebanon’s six-million-strong population now live in poverty and many are unable to afford food amid spiralling prices.