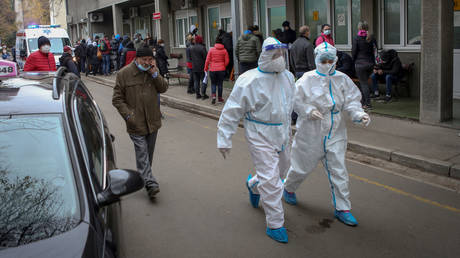 Serbia’s health system is at a tipping point amid an overwhelming rise in Covid-19 infections, the nation’s medical experts warned Tuesday, urging the government to impose an immediate lockdown and state of emergency.

Speaking on RTS television, Serbia’s chief epidemiologist Predrag Kon said that the Crisis Staff advisory body has called for an immediate lockdown to avert a collapse of the health system. Only pharmacies, food stores and petrol stations should remain open, he said, adding there was “no alternative” but to impose a state of emergency.

“The proposal is that unprotected contacts must be banned, otherwise we will break like a rattle and only then will it be clear what that means when the health system breaks,” Kon said.

Daily cases have been rising sharply in the nation of 8.7 million, and health officials blame a recent surge on Serbs mingling at parties and nightclubs, as well as at the ski resorts which have stayed open all winter. Authorities have reported more than 3,000 new cases daily over the past week and more than 4,000 are currently hospitalized with the virus.

There was no immediate government reaction to the lockdown call.

The recent spike in cases comes as the latest figures from Serbia’s mass vaccination program show that 1 million people have been inoculated so far, mostly with China’s Sinopharm jabs, as well as Pfizer-BioNTech, Sputnik V and recently Oxford/AstraZeneca.

On Tuesday, President Aleksandar Vucic flew to Sarajevo to deliver 10,000 doses of AstraZeneca vaccines to Bosnian authorities, saying it was an act of solidarity as he urged cooperation among Balkan countries in tackling the pandemic.