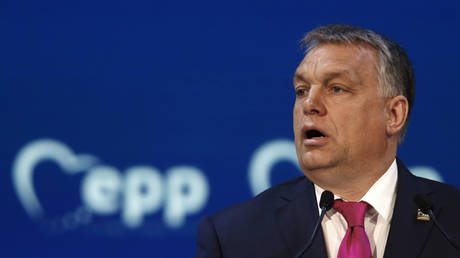 Hungarian Prime Minister Viktor Orban’s Fidesz party has quit the European People’s Party (EPP) group in the European Parliament after EU MEPs voted in favor of a motion that would pave the way for Orban’s party to be excluded.

“I hereby inform you that Fidesz MEPs resign their membership in the EPP group,” Orban wrote on Wednesday to the bloc’s chairman, Manfred Weber.

We will not let our MEPs be silenced or limited in their capacity to represent our voters. Tackling the pandemic and saving lives remains our number one priority. Therefore, following the adoption of new rules in the @EPPGroup, #Fidesz has decided to leave the Group. pic.twitter.com/WSx1PmtKQ8

Orban’s letter came after 148 EPP MEPs voted in favor, and 28 against, new rules that would allow the group to exclude members. An EPP source said that French, Italian, Slovenian, Hungarian, and Croat members voted against the new rules.

The Hungarian prime minister described the rule changes as a “clearly a hostile move against Fidesz and our voters,” adding that the move against his party was “antidemocratic, unjust and unacceptable.” Orban had previously threatened that Fidesz would leave the group if the vote was passed by EPP MEPs.

Fidesz was suspended from the EPP in March 2019, but the 12 Hungarian lawmakers continued to enjoy the benefits of membership, aligning their votes accordingly.

The center-right bloc has struggled to manage Orban and his Fidesz party, which has increasingly been at odds with the EU.

Just last week, the EU’s advocate general delivered a damning opinion on Hungary’s treatment and processing of migrants following its 2018 reforms, noting that Budapest failed to fulfill its obligations under European law.

Budapest has previously dismissed criticism of its handling of migrants.