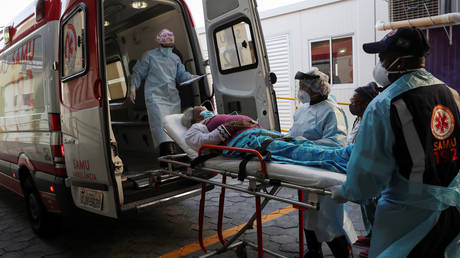 Brazil’s state of Sao Paulo will adopt the country’s most severe Covid-19 restrictions this weekend in a bid to curb the spread of the virus and prevent hospitals being overwhelmed, Governor Joao Doria announced on Wednesday.

“We in Sao Paulo and Brazil are on the verge of collapse. It requires collective and urgent measures,” Doria told a press conference.

The governor confirmed that the state would return to the so-called “red phase” of health measures from 00:00 (Brasilia time) from March 6 until March 19.

Most of Sao Paulo’s economy, including bars and restaurants, will be shut down, while shopping malls and other non-essential services will be forced to close.

Schools and churches are allowed to remain open, along with essential businesses like pharmacies and supermarkets.

The announcement comes after the health department in Brazil’s most populous state announced a record 468 new Covid-19 deaths on Tuesday, its highest 24-increase in fatalities of the pandemic. More than 60,000 people in the state have died from the virus in total.

For the first time in the pandemic, more than 7,000 patients are now being treated in intensive care in Sao Paulo – far more than the previous record of 6,250 seen during the first infections peak in July.

Some hospitals in the city of Sao Paulo have already reached 100 percent capacity, according to local media.

Last week Doria announced tougher restrictions, including an 11pm-5am curfew across all of Sao Paulo’s municipalities.

The policing of public health measures was also stepped up in a bid to clamp down on the gathering of unauthorized crowds and businesses flouting the rules.

With more than 257,000 fatalities, Brazil as a whole has recorded the world’s second highest Covid-19 death toll after the US, according to data from Johns Hopkins University.