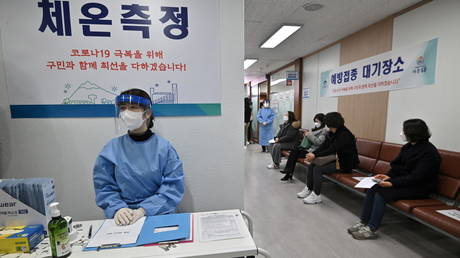 South Korea’s Disease Control and Prevention Agency has launched an investigation into the cause of the deaths of two people days after receiving the Oxford/AstraZeneca Covid-19 vaccine.

The two individuals, who weren’t related and had pre-existing conditions, passed away on Tuesday and Wednesday after falling ill shortly following receiving their vaccination.

A 63-year-old nursing home resident, who was previously diagnosed with cerebrovascular disease, developed fatal blood poisoning and pneumonia after experiencing a severe fever.

The other victim was an individual who was in their 50s and had a history of cardiac disorder and diabetes. They suffered several heart attacks a day after taking the vaccine.

The Korea Disease Control and Prevention Agency only confirmed that it was investigating what caused the deaths. However, they did not confirm the victims or provide any further information about their investigation.

AstraZeneca declined to comment, with a company spokesperson in Seoul saying they had no statement to make at this time.

South Korea has previously advised that individuals 65 and over should not receive the vaccine, as they believe there is not enough data to prove it is safe and effective for that age group.

However, no concerns have been raised by health officials in the country for individuals with pre-existing conditions.