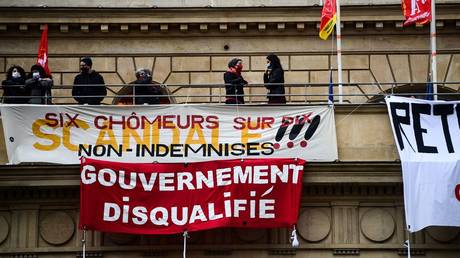 Dozens of demonstrators have taken over Paris’s Odeon Theater as part of national protests against the continued closure of cultural venues as the French government brings in tougher Covid-19 curbs.

Police in the French capital closed off all entrances to the area surrounding the historic building, one of France’s national theaters, after as many as 80 people reportedly made their way inside on Thursday.

Banners with anti-government slogans were unfurled above the theater entrance, while more than a dozen activists and entertainment workers could be seen occupying the building in videos posted to social media.

Among the banners was that of the CGT, one of France’s main trade unions, which also organized a cultural rally of 300 people in the southern city of Marseille on Thursday.

Several thousand people were reported to have staged protests across France, including marches in Paris and the city of Lyon, one of several areas forced into tougher Covid-19 measures in recent weeks.

Those working in France’s cultural sector are demanding a one-year extension to government-subsidized salaries, which are due to end in August.

They are also angry that the government has not set a date for the reopening of cultural venues, which were closed in October.

Aisne, Hautes-Alpes and Aube join the 20 departments already under enhanced surveillance, meaning the regions could be slapped with tougher Covid-19 rules if their already-high infection rates don’t fall.

Castex also announced that the northern area of Pas-de-Calais would be placed under a new weekend lockdown, like Nice and Dunkirk, meaning that its residents will be hit with a curfew from 8 a.m. this Saturday until 6 p.m. on Sunday.

France’s seven-day Covid-19 infection rate has slowly crept up in the last couple of weeks and now stands at 221 cases per 100,000.