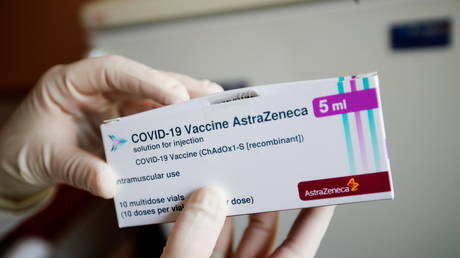 Germany has recommended the administration of AstraZeneca’s Covid-19 vaccine to people aged over 65, marking a major change in the nation’s inoculation campaign which has so far seen a number of the Anglo-Swedish shots go unused.

“This is good news for older people who are waiting for a vaccine. They can now be vaccinated more quickly,” Health Minister Jens Spahn said on Thursday, adding “we will shortly issue a regulation implementing both recommendations.”

Germany’s Standing Committee on Vaccination (StiKo) has advised that the two doses should be separated by a 12-week interval, mirroring the administration process in the UK, Spahn said.

The decision comes as new real-world data emerged from the use of the AstraZeneca vaccine across the UK. Research published by Public Health England on Monday reinforced its effectiveness in the elderly, reducing hospitalization risk from Covid-19 by 80 percent among people aged 80 and over.

A similar study in Scotland showed that four weeks after the first doses of the AstraZeneca vaccine were administered hospitalization risk fell by up to 94 percent. Meanwhile Pfizer’s jab was deemed to be less effective, reducing hospitalization by 85 percent.

The move in Germany also comes after France made a similar decision to allow older people to receive the jab on Tuesday but chose to limit its use to those under the age of 75.

Both France and Germany had previously limited its use to those under the age of 65 amid claims there was insufficient trial data to support its administration in older generations.

The shot has so far been notoriously underused across Europe. Last week, Elke Breitenbach, Berlin’s senator for social services, said that doses in the German capital are going to waste and called for the spare shots to be given to the city’s homeless.