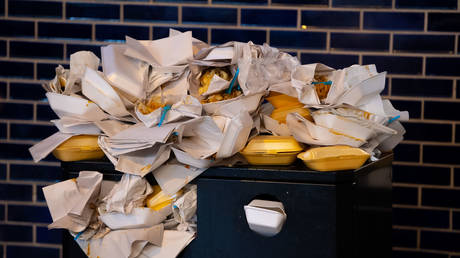 Almost one-fifth of all food that’s produced to be eaten by consumers goes to waste, the UN Environmental Program (UNEP) said in a new report, noting that most of the waste (61 percent) is actually produced by households.

The global food waste index, released by the UNEP on Thursday, found that 17 percent of the food – some 931 million tons – produced in 2019 ended up in bins. The startling figure does not include food that was wasted during production or while in storage and which never made it to consumers.

Inger Andersen, executive director of the UNEP, said that reducing food waste would cut greenhouse gas emissions, slow the destruction of nature, enhance food availability and save money at a time of global recession.

If we want to get serious about tackling climate change, nature and biodiversity loss and pollution and waste, businesses, governments and citizens around the world have to do their part to reduce food waste.

The UNEP said that 690 million people were affected by hunger in 2019 and three billion unable to afford a healthy diet. Even still, the report found that among almost all nations that measured food waste, the levels were substantial regardless of income level.

The agency found that most of this waste comes from households, which discard 11 percent of the total food available at the consumption stage of the supply chain, while food services and retail outlets waste five and two percent respectively.

The data in the UNEP report included food waste that occurs in retail outlets, restaurants and homes and it also covered food and inedible parts such as bones and shells.

“[E]ven if inedible parts (bones, pits, eggshells, etc.) predominate in lower income countries, there is sufficient total food waste in these areas for circular approaches or other food waste diversion strategies to be important,” the report noted.