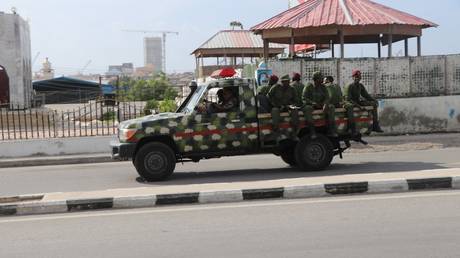 At least 20 people have been killed and dozens more injured in a suicide car bombing in Mogadishu. The incident occured on the same day Somali Islamist militants stormed a jail in the semi-atonomus Puntland state.

The blast struck outside the Luul Yemeni restaurant on Friday evening, with eyewitness footage of the scene showing the scale of devastation as locals and first responders bearing torches searched through the debris in the dark for other victims.

No one has claimed responsibility for the attack, and local medics have warned that the death toll may rise. Local reports say the scale of the blast brought down one building.

“So far we have carried 20 dead people and 30 injured from the blast scene,” Dr. Abdulkadir Aden, founder of AAMIN Ambulance services told Reuters.

The Mogadishu blast occurred on the same day Somali Islamist militants stormed a jail in the semi-atonomus Puntland state. At least seven soldiers were killed when members of the al-Shabaab terrorist group targeted the site in what one prison guard told Reuters was a “hellish battle.”

The militants claim to have released some 400 prisoners, including members of their group, though that figure has not been confirmed by the authorities.

Al-Shabaab has carried out repeated attacks in Somalia in its efforts to overthrow the government and establish its own sharia law-based governance.