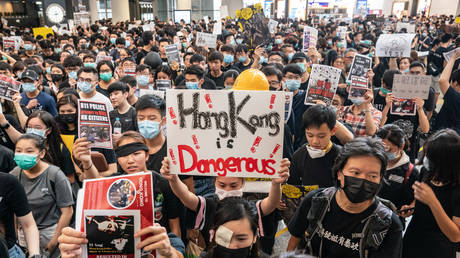 Four members of the group of 47 Hong Kong activists charged with conspiracy to commit subversion have been granted bail after prosecutors dropped an appeal against a decision to temporarily release them.

Under the national security case, the 47 activists – aged 23 to 64 – who say they are campaigning to protect democracy in Hong Kong are set to stand trial on charges of being part of a “vicious plot” to “overthrow” the government. If convicted, they could face sentences of up to life in prison.

The charges focus on an unofficial poll that was held in July 2020, when hundreds of thousands of people voted despite officials decrying it as illegal and a violation of the then-newly-passed national security law. The poll was designed to select the opposition candidates who’d stand office in September 2020.

The high turnout resulted in the success of 16 young politicians seen as more moderate and pro-democracy led by prominent activist Joshua Wong, who has since been jailed by the Chinese government on separate charges.

Among the remaining 43 activists, 32 were denied bail and 11 were granted temporary release under strict conditions, although they will have to remain in prison while the government appeals the bail decision.

The national security law came into effect in Hong Kong on June 30, 2020, shortly after the 23rd anniversary of the region’s return to China from the UK. It makes collusion with foreign forces, secession, subversion and terrorism punishable by a life sentence, while damage to public transport can be prosecuted as a terrorist act. Anyone convicted under the law can be barred from holding public office.

The legislation has also led to the establishment of a security office in Hong Kong allowing Beijing law enforcement to supersede local authority figures.

Hong Kong is in the middle of a planned overhaul of the electoral system which could result in elections for its legislature being pushed back from this year to September 2022. The new measures are expected to uphold China’s traditional ‘patriots’ principle, which allows only pro-China individuals to rule Hong Kong.