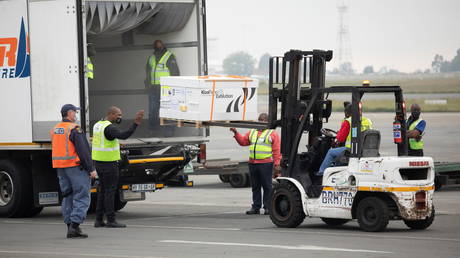 South Africa’s Health Ministry has revealed it’s in talks with the African Union (AU) to buy 10 million Covid vaccines after an initial order of AstraZeneca vaccines proved “disappointing” in fighting the new variant of the virus.

Sandile Buthelezi, the director general of the Department of Health in South Africa, revealed to a parliamentary committee that the country is looking to purchase the vaccines through the AU but did not specify which company’s doses they were looking to acquire.

South Africa has found its vaccine rollout slowed after it ceased using the AstraZeneca jab following “disappointing” trial results that showed the company’s doses weren’t effective in fighting the new variant of the virus that has spread across the county.

Professor Shabir Madhi, who conducted the trial into the effects of the AstraZeneca vaccine, explained that the government had to stop distributing it after initial data showed it did “not work against mild and moderate illness” from Covid-19.

The decision to cease using the AstraZeneca vaccine has left South Africa with a significant supply of excess and unused doses, which the county has now offered to share with other Africa nations, where it might prove more useful in controlling the spread of the virus and protecting citizens against the disease.

Separate to its conversations over securing 10 million vaccines for its own citizens, South Africa is negotiating an agreement with the African Union, Afreximbank and the Serum Institute of India help 18 Africa countries by providing their vaccine programmes with AstraZeneca doses.

Since the start of the pandemic, South Africa has reported 1,516,262 confirmed cases of the virus and 50,366 deaths, the highest number of infections of any country on the continent.

The majority of countries in Africa are set to receive Covid-19 vaccines through the international Covax scheme, with nations starting to get deliveries back in February. The programme has a target of exporting 2 billion vaccines around the world by the end of the year, with 600 million set aside for Africa alone.