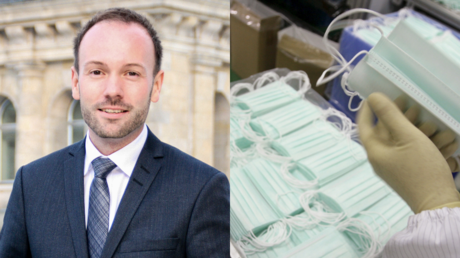 German MP Nikolas Löbel, a member of Chancellor Angela Merkel’s CDU party, will quit parliament and not seek re-election. The reason? A series of deals on protective face masks that landed Löbel around €250,000.

As the coronavirus pandemic took hold in Germany, a company owned by Löbel brokered deals between a Chinese face-mask manufacturer and healthcare companies in the cities of Heidelberg and Mannheim. The contracts netted the 34-year-old MP a cool €250,000 ($298,000), Der Spiegel reported on Friday.

Löbel, who initially defended his deal as “in line with the market,” was bombarded with calls to resign, and on Sunday announced that he would retire from politics at the end of August, and from the CDU and its sister party, the CSU, immediately.

“Being a member of the German Bundestag and being able to represent my home city of Mannheim, there is a great honor and special moral duty,” he wrote in an apology statement to German media. “I take responsibility for my actions and draw the necessary political consequences.”

Löbel’s August retirement date wasn’t soon enough for his opponents, who continued to press for his immediate resignation. After a meeting on Sunday afternoon, his own party sided with the opposition, demanding that Löbel “complete this withdrawal from all offices and mandates” by the end of March.

By Saturday evening, it was still unclear whether Löbel would honor his party’s demand.

Löbel is not the first CDU politician embroiled in a mask-supply scandal. Georg Nüsslein, a CSU lawmaker from Bavaria, has been accused of lobbying the government on behalf of a mask supplier last year, earning €660,000 ($800,000) that he then didn’t pay tax on. Nüsslein denied any wrongdoing, but resigned on Friday from his post within the CDU/CSU parliamentary group, and announced that he would not seek reelection in September.