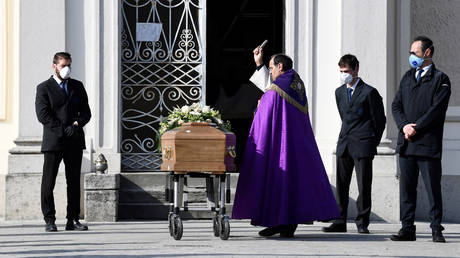 More than 100,000 people have now died from Covid-19 in Italy, the health ministry said on Monday, as the country’s new prime minister, Mario Draghi, called on Italians to stick to the health measures to avoid an infection surge.

“We are facing a new worsening of the health emergency. Everyone must do their part to contain the spread of the virus,” Draghi said in a video message on Monday afternoon.

The PM, who was sworn in last month, also pledged to strengthen and speed up Italy’s vaccine rollout for the most vulnerable groups in the coming days.

Last week, the government ordered all schools to close in infection hotspots as it introduced a new tier system of restrictions for the 20 regions, in a bid to tackle a recent uptick in Covid-19 infections caused by variants of the virus.

Most of Italy has been placed in the two most-severe tiers, including Basilicata, Campania, and Molise, which have all been designated ‘red zones’ due to their infection levels.

All bars, restaurants, and non-essential retailers are closed in these regions, with takeaways permitted only between certain hours and travel also strictly limited.

The measures are set to last until April, but the government is reportedly considering further action, including a national lockdown, according to local media.