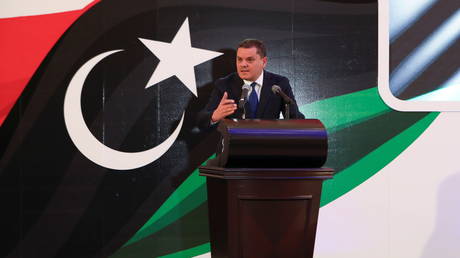 Libya’s parliament has given its approval to Prime Minister Abdulhamid Dbeibeh’s cabinet during a vote in the war-torn city of Sirte, with representatives overwhelmingly backing the motion by 132 votes to two.

“Through this vote, it became clear that the Libyans are one unit,” Dbeibeh told parliament after the vote. He also called on the country’s almost 7 million citizens to “open your hearts to one another and forget the grudges.”

Speaker Aguila Saleh said it was “a historic day for the House Representatives,” after the vote, which was originally scheduled for Monday, finally took place on Wednesday.

Dbeibeh’s new interim government faces the tough task of replacing two administrations – the Government of National Accord (GNA), and another government in eastern Libya allied with military commander Khalifa Haftar, which ran in parallel.

Both the GNA and the eastern-based administration have agreed to hand power over to a central government.

Dbeibeh said on Tuesday that his new cabinet would “serve all of Libya,” and not just the cities and regions that its members hail from. “We must live to the responsibility of achieving the goal of serving our country, and not focus on just the cities or areas of origins of the senior government officials,” he added.

Dbeibah was himself selected on February 5 by a forum of 75 Libyan delegates at UN-led talks in Switzerland. He will now lead the country through to long-awaited elections on December 24.

Libya has been ravaged by civil war and conflict for years, with various factions vying to take power in the wake of the overthrow of long-time ruler Muammar Gaddafi in 2011.