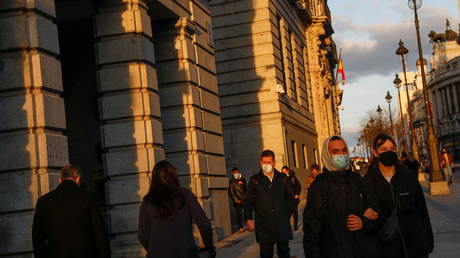 The Madrid region will be the only one in Spain without a Covid-19 border shutdown for Easter, its President Isabel Diaz Ayuso said on Wednesday following a meeting of top-level health chiefs.

Spain’s Interterritorial Council of the National Health System (CISNS) met to approve a number of health measures for Spanish regional and national holidays, including border closures.

But Ayuso announced that Madrid would not close its perimeter from March 17 to 21 or between March 26 and April 9, and would instead “take the measures that we believe appropriate.”

In theory, visitors will therefore be able to enter Madrid for the festival of San José on March 19 and Easter – known in Spain as Semana Santa – when it begins on March 28.

Madrid will enforce the other measures adopted by the CISNS for the holiday periods, including night-time curfews from 11pm-6am and limiting group sizes to a maximum of six people outside and four indoors.

The Spanish government’s health minister, Carolina Darias, told reporters on Wednesday that the intention behind the measures is “to continue saving lives” over the Easter period – traditionally a very important time for Spaniards, when families typically gather for large celebrations.

However, Madrid’s own health minister Enrique Ruiz Escudero has criticized the fact that Spain’s 17 autonomous regions can close their borders, but do not have control over their airports. “It is incomprehensible that a citizen of Madrid cannot go to any Spanish region and a French, a German or a Belgian can,” he said.