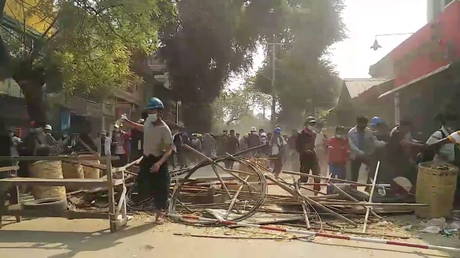 Six people have been killed and eight injured after Myanmar’s military opened fire on a crowd of anti-coup demonstrators in the town of Myaing, as it keeps up its violent crackdown on protesters, according to local media reports.

Footage on social media showed protesters fleeing down a street in Myaing after the military shot “real guns and bullets,” injuring eight individuals and resulting in six fatalities, according to local media. Those figures have yet to be confirmed.

One witness to the events in the town described it as an “emergency situation,” accusing the military of being “terrorists” who were continuing “their killing machine,” leaving Myaing “covered in blood.” The individual shared photographs of the aftermath on Twitter.

There is an emergency situation in Myaing Township, Magway Division !!Junta
terrorists continue their killing machine and almost the entire town is covered in blood.Six people were killed and eight were injured!!#WhatsHappeningInMyanmar #Mar11Coup pic.twitter.com/qZLrf5xWhG

Prior to the violence on Thursday, the Assistance Association for Political Prisoners, a human rights organization in Thailand, reported that more than 60 protesters have been killed and 2,000 have been detained since the coup began on February 1.

BREAKING: Six people were killed in the crackdown in #Myaing Township, Magway Region and at least 8 people got injured.

The recent violence in Myaing came after Amnesty International raised concerns about the actions of the military in the country, accusing them of using battle tactics against peaceful protesters and suggesting that the deaths of demonstrators amount to extrajudicial executions.

The Myanmar military has not commented on Amnesty’s accusations, but it has previously argued that it is acting with as much restraint as possible, while trying to contain “riotous protesters.”

The military seized control of the country on February 1, removing civilian leader Aung San Suu Kyi and members of her National League for Democracy party from power. The coup took place several months after Suu Kyi’s party secured a majority victory in the country’s elections, handing a significant defeat to the military-aligned political party. The return to military control and declaration of a year-long state of emergency comes only 10 years after civilian rule was introduced in the country.