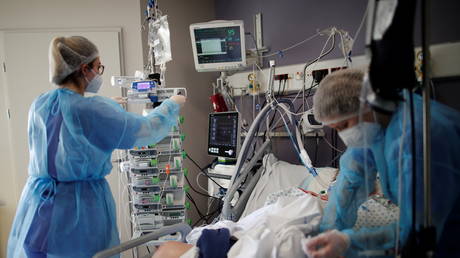 The French Health Minister Olivier Veran has asked Paris’ regional health director to mobilize all public and private services amid fears that the capital’s hospitals could be overwhelmed by a spike in Covid-19 admissions.

In the French capital’s wider Ile-de-France region, someone is admitted to an intensive care unit every 12 minutes, Veran warned during a weekly government press conference on Thursday.

He said the situation is of “particular concern” and that the sharp increase in Parisian ICU admissions could surge from the current 1,080 patients to 1,500 by the end of March at current rates, marking a “critical threshold.”

There were fewer than 3,000 people in French ICU beds at the end of January, but a slow uptick in infections has pushed that figure to 3,992, as of Thursday, according to health ministry data.

Veran said that although France’s national infection rates remained stable, health chiefs were concerned about the regions of Hauts-de-France and Provence-Alpes-Côte d’Azur, which have both been placed under weekend lockdowns in recent weeks.

France’s creep in Covid-19 infections through January and February is in part caused by the British variant of the virus, which now makes up 67 percent of cases, while there are relatively low rates of the Brazilian and South African strains.

On Thursday, France’s Foreign Minister Jean-Yves Le Drian announced that he would self-isolate after a person in his family came into contact with someone who had tested positive for the virus.