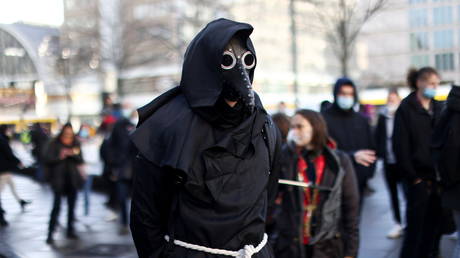 Several separate rallies were held in Germany’s capital city of Berlin. The largest one, with some 1,000 people in attendance according to police estimates, began at noon outside the federal health ministry.

The event was not marred by any major incident, the police said, with the officers present at the scene primarily focused on checking that participants were properly masked.

Another large protest was held in the southwestern city of Stuttgart, with hundreds marching through the streets to decry the restrictions. The event has not seen any major incidents either.

Minor clashes between the police and protesters have been reported in the eastern German city of Dresden. Despite failing to secure authorization for the event, hundreds of anti-lockdown activists gathered in the city’s center, while law enforcement tried to push them back and urged them to disperse in an orderly manner.

The first anti-coronavirus restrictions were rolled out across Germany on March 13 last year, with most of the country’s states ordering the closure of schools and nurseries, while Bundesliga opted to postpone all its football matches. The restrictions have been repeatedly eased and re-tightened across the country since then.

Last month, the government presented a five-step plan that envisions gradual lifting of the measures depending on the seven-day Covid-19 infection rate. Still, a full reopening might not come anytime soon, as the country has seen cases rise in recent weeks.

Moreover, Germany may face a new spike in April on par with – and above – the figures registered ahead of Christmas last year, experts with the Robert Koch Institute (RKI) for infectious diseases have warned.

“An extrapolation of the trends shows that case numbers can be expected above the Christmas level from week 14 onwards,” the RKI said in its current situation report on Saturday.

So far, Germany has registered over 2.5 million cases of coronavirus, including more than 73,000 deaths, according to the latest RKI figures.