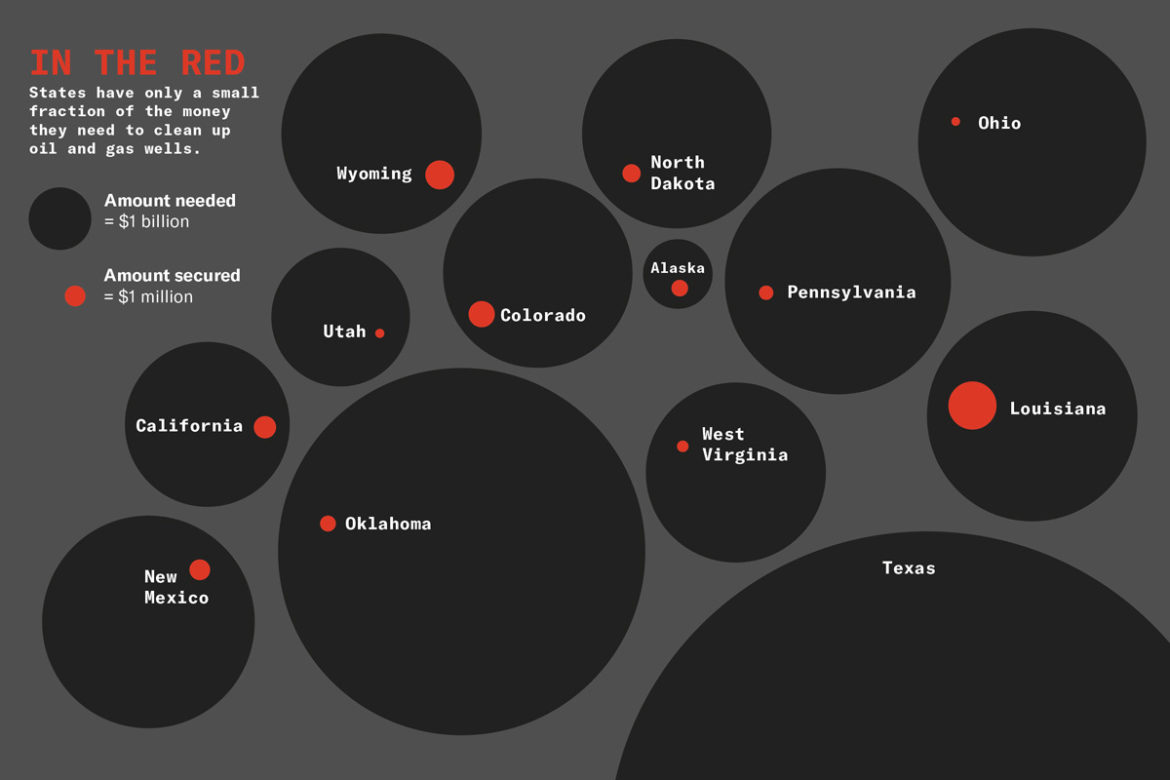 This story was originally published by High Country News and is reproduced here as part of the Climate Desk collaboration.

When an oil or gas well reaches the end of its lifespan, it must be plugged. If it isn’t, the well might leak toxic chemicals into groundwater and spew methane, carbon dioxide, and other pollutants into the atmosphere for years on end.

But plugging a well is no simple task: Cement must be pumped down into it to block the opening, and the tubes connecting it to tanks or pipelines must be removed, along with all the other onsite equipment. Then the top of the well has to be chopped off near the surface and plugged again, and the area around the rig must be cleaned up.

There are nearly 60,000 unplugged wells in Colorado in need of this treatment—each costing $140,000 on average, according to the Carbon Tracker, a climate think tank, in a new report that analyzes oil and gas permitting data. Plugging this many wells will cost a lot —more than $8 billion, the report found.

“The system has put the state at risk, and it needs to change.”

Companies that drill wells in Colorado are legally required to pay for plugging them. They do so in the form of bonds, which the state can call on to pay for the plugging. But as it stands today, Colorado has only about $185 million from industry—just 2 percent of the estimated cleanup bill, according to the new study. The Colorado Oil and Gas Conservation Commission (COGCC) assumes an average cost of $82,500 per well—lower than the Carbon Tracker’s figure, which factors in issues like well depth. But even using the state’s more conservative number, the overall cleanup would cost nearly $5 billion, of which the money currently available from energy companies would cover less than 5 percent.

This situation is the product of more than 150 years of energy extraction. Now, with the oil and gas industry looking less robust every year and reeling in the wake of the pandemic, the state of Colorado and its people could be on the hook for billions in cleanup costs. Meanwhile, unplugged wells persist as environmental hazards. This spring, Colorado will try to tackle the problem; state energy regulators have been tasked with reforming the policies governing well cleanup and financial commitments from industry.

“The system has put the state at risk, and it needs to change,” said Josh Joswick, an organizer with the environmental group Earthworks. “Now we have a government that wants to do something about it.”

When it comes to cleanup, Colorado uses a tiered system known as blanket bonding. Small operators can pay ahead with bonds on single wells. Drillers with more than 100 wells statewide pay a fixed reclamation fee of $100,000, regardless of the number of wells. A similar system also applies to wells on federal public land in the state. Large companies pay a single $150,000 bond, which covers unlimited federal public land wells throughout the country. There are about 7,400 public-land wells capable of producing oil or gas in Colorado, according to the Bureau of Land Management.

Nearly half of the state’s unplugged wells are stripper wells—low-producing operations with small profit margins.

When a driller walks away or cannot pay for cleanup, the well enters the state’s Orphan Well Program, which works to identify and plug these wells. There are about 200 wells in the program right now, according to the state. But a closer look at state data reveals a large number of wells at risk. Nearly half of the state’s unplugged wells are stripper wells—low-producing operations with small profit margins often at the end of their lifespans. These wells are particularly vulnerable to shifts in oil prices. That means they change hands often. “This is a common tactic in the oil and gas industry: Spinning off liabilities to progressively weaker companies, until the final owner goes bankrupt and none of the previous owners are on the hook for cleanup,” said Clark Williams-Derry, a finance analyst with the Institute for Energy Economics and Financial Analysis.

There are also inactive wells: Nearly 10 percent of the state’s wells have not produced oil or gas in at least two years, according to a Carbon Tracker analysis of state permitting data. Unlike some of the neighboring oil states, Colorado requires that companies pay a single bond on each inactive well of this sort. This costs either $10,000 or $20,000, depending on the depth of the well. In theory, these payments protect the state, in case the well owner goes bankrupt. But in Colorado, it’s still far cheaper for energy companies to pay the cost of that single, unused well—and the small annual premium payments on the bond—than to actually plug it. “Colorado clearly makes it cheaper to idle a well than to clean it up,” Williams-Derry said.

In Colorado, just two companies are responsible for nearly 70 percent of the bonds for currently inactive wells. One is Noble Energy Inc., which was purchased by the global oil giant Chevron in October 2020. The other is Kerr-McGee, a subsidiary of Occidental Petroleum. Kerr-McGee was responsible for the 2017 home explosion in Firestone, Colorado, that killed two people. Last year, the COGCC fined the company more than $18 million for the accident, by far the largest fine in state history.

Both companies still own large numbers of wells in the Denver-Julesburg Basin, the prolific oil and gas formation beneath central and eastern Colorado. And the mass desertion of wells is not hypothetical: In fall of 2019, a small company called Petroshare Corporation went bankrupt and left about 90 wells for the state to cleanup. That alone will cost Colorado millions of dollars. Last summer, when California’s largest oil driller filed for Chapter 11 bankruptcy protection, it left billions in debt and more than 17,000 unplugged wells.

The oil and gas industry is already mired in a years-long decline that raises doubts about its ability to meet cleanup costs. In six out of the past seven years, energy has been either the worst- or second-worst-performing sector on the S&P 500. And the economic fallout from COVID-19 has only accelerated the decline. Oil prices hit record lows in 2020. The industry’s debt approached record levels, and thousands of oilfield workers lost their jobs, Colorado Public Radio reported. Many companies went bankrupt, including 12 drilling companies and six oilfield service companies in Colorado, according to Haynes and Boone LLP, a law firm that tracks industry trends.

In 2019, a new law completely overhauled the state’s relationship to oil and gas. This spring, Colorado oil and gas regulators are tasked with reforming the financial requirements for well plugging. It’s a big deal, especially in an oil state like Colorado: The law gives local governments more control over oil and gas development, and it rewrote the mission of the COGCC, the state’s energy regulator. The COGCC has subsequently banned the burning off or releasing of natural gas, a routine drilling practice, and instituted a broad range of wildlife and public health protection policies. Recently, it voted for the nation’s largest setback rule, which requires oil and gas operations to stay at least 2,000 feet from homes and schools.

The deep divide between the true cost of cleanup and what industry has so far ponied up is not news to Colorado regulators. In a 2017 letter to lawmakers, the COGCC estimated that the average costs of plugging wells and cleaning up the drilling site “exceed available financial assurance by a factor of fourteen.” With this new rulemaking process, Colorado has a chance to make up this gap.

How to handle this looming liability remains an open question, said John Messner, a COGCC Commissioner. The rulemaking process is still in its early stages and will take months. The commission is asking stakeholders of all kinds—industry, local governments, environmental groups and more—to submit suggestions and opinions to the commission. There are several different methods for how best to reform the process, Messner said. That might involve leaving the current structure in place, while increasing the bond amounts, including on individual well bonds. It might mean a revamped tiered system, where more prolific producers pay more, or a different fee structure based on the number of drilled wells. Messner mentioned the option of a bond pool, where companies pay into a communal cleanup fund and, at least in theory, provide industry-wide insurance to guard against companies defaulting on cleanup obligations. Messner stressed that no formal decisions have been made and that the final rule could involve some combination of these and other tools.

I asked Messner about balancing the pressing need to increase cleanup requirements with the possibility of companies walking away from their wells if the cost to operate in Colorado spikes. “It’s a real risk,” Messner said. The Colorado Oil and Gas Association expressed a similar concern in an email to HCN.

“When it comes to financial assurance for current or future wells, we need to ensure that the potential solution doesn’t create an even bigger problem by raising the cost of doing business in Colorado for small businesses,” said COGA President Dan Haley in a statement. “Regulatory changes in the past two years alone are costing oil and gas businesses an extra $200 million a year. For our state to stay competitive, regulators and lawmakers need to be cognizant of that growing tally and the rising cost of doing business.”

But as it stands today, oil and gas companies aren’t realistically paying anywhere near the true cost of cleaning up their drilling sites. And with the industry’s murky financial future, experts predict more and more sales of risky wells to less-wealthy operators, until the state could end stuck with the final cost.

“It’s like a game of hot potato,” Williams-Derry said, “except that when the potato goes off, it’s the public who loses.”