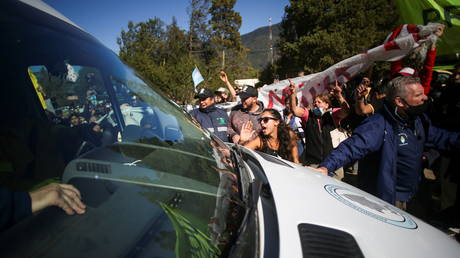 A van carrying Argentina’s president was attacked by a group of protesters as he visited the wildfire-ravaged region of Patagonia. The activists reportedly protested against plans to resume open-pit mining in the area.

President Alberto Fernandez got up-close and personal with Argentinian protesters as he visited a community center in the southern province of Chubut. The area has recently been hit by massive wildfires, which have left at least one dead and many injured, with over 10 missing, according to local media. The fire has destroyed multiple vehicles and dozens of homes.

Fernandez was confronted by dozens of protesters as he left the community center and tried to get into a van waiting for him. The vehicle was surrounded by people who pounded on the windows and pelted the president’s motorcade with various projectiles, footage from the scene shows.

The protest was not directly linked to the recent wildfires or the government’s handling of them. They were instead protesting plans to resume open-pit mining in Chubut, according to local media reports.

The motorcade was ultimately able to get out and the president escaped safely. The van was seen after the altercation with some of its windows broken, though it is not immediately clear at what point the vehicle was damaged.