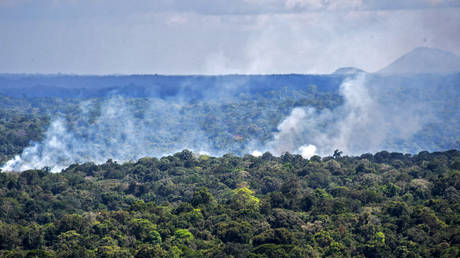 Staggering new research by a group of over 30 scientists suggests that the Amazon Basin may become a net contributor to global warming, not cooling, in the next few years, if it hasn’t already.

The Amazon Basin’s profound influence on global climate had previously earned it the illustrious title, ‘the lungs of the Earth,’ but decades of wildfires, subsequent drought, and land clearing, under the umbrella term ‘deforestation,’ have wrought havoc on the region.

According to a recent study, the roughly 7,000,000 sq-km (2,700,000 sq-mile) Amazon Basin is now releasing more heat-trapping ‘greenhouse’ gases than it is storing in its plants and soils, meaning it may have become a net contributor to the warming, not the cooling, of the planet.

In other words, humanity can no longer rely upon the so-called “lungs of the Earth” to clean the air and offset emissions from burning fossil fuels.

“Cutting [down] the forest is interfering with its carbon uptake; that’s a problem,” ecologist and lead author Kristofer Covey at Skidmore College in New York said.

“But when you start to look at these other factors alongside CO2, it gets really hard to see how the net effect isn’t that the Amazon as a whole is really warming global climate.”

All told, the vast area which spans territory belonging to nine South American nations could flip from a carbon sink to atmospheric carbon source as soon as 2035, according to some estimates.

The Amazon Basin is currently emitting more gases than it naturally absorbs, and not just carbon dioxide (CO2) but nitrous oxide (N2O) and methane (CH4) as well, which degrade faster in the atmosphere but trap up to 300 times more heat per molecule while they are floating around in the air.

The area’s recurring, prolonged droughts reduce the Basin’s capacity to absorb and trap CO2 while increasing the likelihood and eventual spread of wildfires as and when they do occur, further exacerbating the problem in a negative feedback loop.

The research team freely admits that there is a large degree of uncertainty in their results due to a dearth of information from certain sections of the Amazon Basin which boast their own microclimates but which are nigh on impossible to reach and analyze to the same extent as the sections covered in the study.