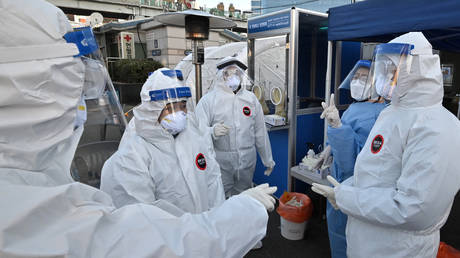 A coronavirus-testing campaign launched by a South Korean province to probe foreign workers has sparked discontent over its poor execution and has also led to accusations of thinly-veiled racism.

The province of Gyeonggi, the most populous region of South Korea and home to some 13 million people, launched the testing campaign last week. The measure was taken after at least 275 foreigners, employed at various enterprises in the region, tested positive for coronavirus.

The province has some 85,000 registered foreign workers, as well as an unknown number of illegal ones, with estimates spanning from 100,000 to 200,000 people. Those who opt to skip the test could face fines of up to three million won (about $2,640).

As of Monday, some 120,000 had been tested, with mere 120 returning positive for Covid-19, a provincial official told Reuters. The testing drive also ran into logistics problems, with centers unable to process the flow of migrants lining up for the test. A testing center in the city of Ansan, for instance, saw the numbers growing from around 100 people per day to more than 1,000 after the foreigner-focused testing was launched.

“I agree that everyone should get tested for Covid, but it is so exhausting to wait for hours,” a Chinese restaurant worker told Reuters, voicing discontent with the treatment the foreigners get. The man was forced to stand in line for about four hours– after he’d queued for hours a day before, only to get turned away.

I am sure Koreans would have protested if this was done the same way for them.

Singling-out foreigners for testing as if they were the root of coronavirus troubles was a xenophobic move on the authorities’ part, other migrants said. Instead of tracing cases and improving working conditions in migrant-staffed businesses, the province opted for a collective punishment of foreigners, they argued.

“I’ve lived in Korea for years, pay a mortgage, run a business, have a family, pay tax,” a graphic designer from the UK stated. “Yet they are treating us like we are the problem because of coronavirus. Feels xenophobic and racist.”

The provincial authorities addressed the allegations on Monday, defending the campaign as an absolute necessity. The drive “was not devised to discriminate against foreigners, but instead is a legitimate quarantine order undertaken as a rapid response to protect all residents of Gyeonggi Province from surges in cluster infections,” provincial authorities said in a statement.

Locals, on the contrary, have been quite supportive of the campaign and insisted that there was nothing racist or xenophobic about it, admitting, however, that they’ve been somewhat reassured by the foreigner-focused drive.

“Since there are a lot of foreigners here, every time a foreigner comes in, it would worry me,” a clothes-shop owner told Reuters. “Now that they are filtering out everyone, it gives me a sense of assurance.”

South Korea is among the countries that have employed the most tough anti-coronavirus restrictions to tackle the pandemic. The hardline approach has apparently worked, as the nation of nearly 52 million has registered only some 96,000 cases of the disease including around 1,600 deaths.