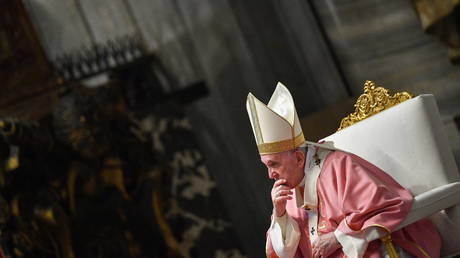 The Vatican’s orthodoxy office has ruled out any possibility of same-sex couples receiving an ecclesial blessing, maintaining that the Church does not approve such unions as God “cannot bless sin.”

A detailed explanation delving into the Catholic Church’s stance on same-sex unions was released by the Congregation for the Doctrine of the Faith – the Vatican’s orthodoxy watchdog – on Monday. The official response comes after repeated proposals to make gay couples eligible for official Catholic Church blessings.

The orthodoxy body, however, firmly rejected such a possibility, though it acknowledged the presence of “positive elements” in same-sex relationship. Even these positives, however, cannot “ justify these relationships and render them legitimate objects of an ecclesial blessing,” it stressed.

“[God] does not and cannot bless sin: he blesses sinful man, so that he may recognize that he is part of his plan of love and allow himself to be changed by him,” the explanatory reads.

While the Congregation reaffirmed that the Church is welcoming towards gay people and they can receive a blessing individually, any unions between them remain off-limits. Such sacramental recognition for gay marriage would be very misleading and would too easily confuse those unions with traditional opposite-sex marriage – the only one accepted by the Church.

“The Church does not have, and cannot have, the power to bless unions of persons of the same sex in the sense intended above,” the Congregation stated.

The explanation appears in line with the views of Pope Francis, who has shown welcome towards the LGBT community and advocated equal rights for its members, including civil union. However, the pontiff clarified that equality lies solely within the civil area, while the Church’s traditional stance remains unchanged.

“Homosexual people have the right to be in a family. They are children of God,” the Pope said in an interview last year.