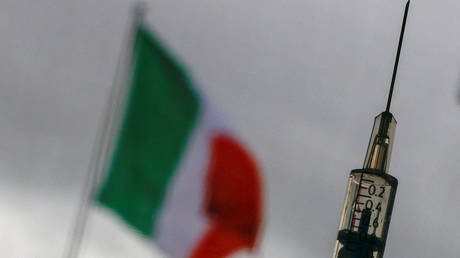 The prosecutor of Biella, Italy has ordered the seizure of nearly 400,000 AstraZeneca vaccines and opened a manslaughter investigation following the death of a 57-year-old man hours after being inoculated.

On Monday, the prosecutor of Biella, a town in the northern Italian region of Piedmont, ordered the preventive seizure of the country’s entire ‘ABV5811’ batch of Oxford/AstraZeneca vaccines. Prosecutor Teresa Angela Camelio’s order affects nearly 400,000 doses of the Anglo-Swedish jab.

Camelio said the decision to seize the batch was made pending the outcome of an investigation by the Judicial Authority and the Medicines Supervision Commission into the death of Sandro Tognatti, a music teacher who died on Saturday night a few hours after the administration of the Covid-19 vaccine produced by AstraZeneca.

The seizure activity… for which at present there is no direct correlation with the reported cases of deaths, is carried out as a precaution in order to proceed with the appropriate clinical analyzes to refute the danger of the drug.

The prosecutor also opened a criminal case against unknown persons for manslaughter following Tognatti’s death.The investigation and seizure order came after the Piedmont region had earlier decided to temporarily suspend the use of the doses in lot ABV5811.

Italy’s national drugs regulator announced on Monday it was suspending the use of the AstraZeneca vaccine in the country.

The AstraZeneca vaccine has been suspended in a number of countries across Europe, including Denmark and Norway, following a number of thrombotic events. On Monday, Germany also suspended use of the vaccine following the advice of the national regulator to investigate reports of blood clots.

The European Medicines Agency and the World Health Organization have said there is no evidence of a causal link between the clotting incidents and the jab.

In the UK, where more than 11 million AstraZeneca jabs have been administered, health experts have reportedly said there has been no increase in the number of cases of blood clots over what they would see normally in the population. Prof. Andrew Pollard, director of the Oxford vaccine group, also said that Finland has done a “very careful study” into the vaccine which did not find an increased risk.