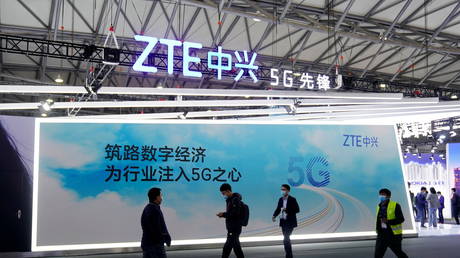 The Chinese Foreign Ministry has taken aim at Washington, labeling it ‘hypocritical’ and claiming it spies on its own allies, after the US designated five Chinese companies as posing a threat to national security under a 2019 law.

These US practices are a complete contradiction of the market economy principles that America has always advertised, Zhao added, blasting Washington for its “groundless” and “hypocritical” move against Chinese firms.

The spokesman said other nations should not be wary of China, but the US, which is guilty of spying on everyone, including its own partners. “The United States has used its technological advantages and installed backdoors to carry out large-scale indiscriminate eavesdropping on other countries in the world, including its allies.”

Acting FCC Chair Jessica Rosenworcel said in a statement: “This list provides meaningful guidance that will ensure that as next-generation networks are built across the country, they do not repeat the mistakes of the past or use equipment or services that will pose a threat to US national security or the security and safety of Americans.”

Last week, Beijing criticized Washington after it was reported that President Joe Biden’s administration had tightened rules on dealing with Chinese tech giant Huawei, restricting US companies from supplying Huawei with products that can be used in 5G devices.