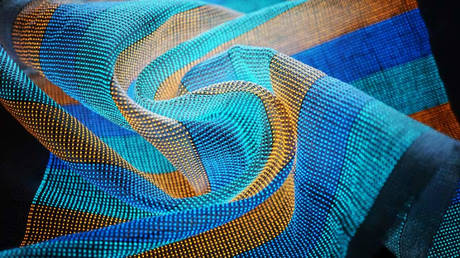 Chinese scientists have unveiled next-generation wearable tech in the form of flexible, breathable electronic fabric which serves as a wearable, washable, interactive display, with diverse applications from telecoms to medicine.

This intricate yet flexible framework could form the basis for ‘smart clothing’ to accompany the already largely ubiquitous smartphones and smart watches seen around the developed world today.

The researchers produced a sheet of woven ‘smart’ fabric 20 feet long by 10 inches wide which can serve as a fabric display comprising roughly half a million pixels, one for each point of overlap between each of the different thread types.

Their wearable displays are reportedly about as bright as the average flat-screen TV and their performance prototype withstood 1,000 cycles of bending, stretching and pressing, and somewhat miraculously, 100 cycles of washing and drying.

Not content with this stress test, the Chinese material wizards took things a step further and developed an interactive, 16-button fabric keyboard, comprising solar-energy-harvesting threads. That’s right, a light-up garment that charges itself, thanks to interwoven battery fibers.

Prototype users could send and receive messages from their sleeves and see their real-time locations displayed on a map, while added electronics afforded wireless bluetooth capabilities to the clever clothes.

“Designers will have another major tool to add into their designs,” said study co-author Qibing Pei, a materials scientist at the University of California, Los Angeles.

The potential for the tech is staggering and crosses numerous and diverse industries, most notably healthcare.

The volunteers were asked to meditate and when the wearable system detected the low-frequency brain waves emitted, it displayed that they were in a “relaxed” state.

When asked to play a high-intensity racing game, the opposite occurred, as the display indicated they were “anxious.”

While the technology is still in its infancy, the potential applications have reportedly drawn significant interest from industry, though it remains to be seen when people’s clothes will quite literally light up the room.

If it came to fruition, the technology would be a giant leap from previous attempts to create smart clothes, such as Google’s Project Jacquard collaboration with Levi’s jeans.