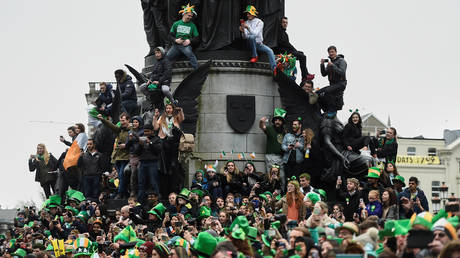 For the millions around the world who claim Irish heritage, March 17 is a day to celebrate all things green, down some alcohol and say cheers to St. Patrick – but Irish ministers are calling for more sober celebrations this year.

Irish government ministers are warning would-be St Patrick’s Day revelers that they should use water, not booze, as their tipple of choice when celebrating the national holiday. And if they really want to be patriotic in the pandemic, better still to stay home while toasting Ireland’s patron saint.

Speaking on Irish radio on the eve of the holiday, Minister of State Patrick O’Donovan urged people to “drown the shamrock with water” this year. Health officials fear alcohol consumption will lead to a breakdown in social distancing and more people gathering in larger groups, increasing the spread of the virus.

The minister also criticized the fact that sales of alcohol in shops and supermarkets – Ireland’s pubs have been shut for most of the past year due to Covid-19 restrictions – had not been curtailed in the lead-up to the March 17 holiday, or during lockdown periods in general.

On December 13, Ireland recorded the lowest virus rates in Europe. A month later, following a relaxation of lockdown rules over Christmas, it recorded the highest number of confirmed cases per million of population anywhere.

Ireland has recorded over 227,000 coronavirus cases over the past year and 4,534 Covid-related deaths. Last year’s St. Patrick’s Day celebrations were canceled as people were told to practice social distancing and not to gather in big groups, and Ireland entered its first strict lockdown two weeks later.

O’Donovan’s sentiments were echoed by Ireland’s higher education minister, Simon Harris, who served as health minister for the first months of the pandemic.

“What I would suggest tomorrow – the most patriotic thing people can actually do in terms of our national battle against Covid-19 – is stick to the public health advice,” Harris said, adding the government wants to be able to issue a roadmap out of lockdown restrictions in the next two weeks.