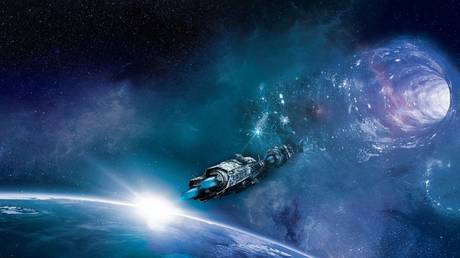 A team of scientists has developed a model that would allow for the existence of traversable wormholes that adhere to the laws of physics without the need for theoretical matter to keep them open. But there’s a catch.

The concept of wormholes harken back to the earliest days of Albert Einstein and Nathan Rosen’s work on general relativity. The pair theorized the existence of an object called an Einstein-Rosen Bridge, a black hole from which nothing can escape, linked to a white hole, which nothing can enter, that spews out the material sucked into the black hole.

Their ideas about particles and antiparticles being linked via a kind of space-time hosepipe never really worked out, but did inspire later work into the concept of wormholes.

The best minds in theoretical physics figured that, while wormholes might work as solutions to Einstein’s mind-boggling equations, they would collapse too quickly for anyone to even attempt to travel through them.

However, new research by a team led by theoretical physicist Jose Luis Blázquez-Salcedo posits the possibility of travel through the wormhole without the need for, as yet theoretical, negative mass. This sounds fantastic. Humanity can now track one down and traverse the stars faster than our wildest dreams, right? Not so fast.

While the proposed wormholes are traversable, the object passing through them would need to be in a quantum state for the physics to work out and prevent the wormhole from collapsing. So, while microscopic amounts of atoms could make it through, until humanity devises a shrink-ray, we won’t be going anywhere in a wormhole any time soon.

Just one more ‘impossible’ piece of science fiction to make a reality before we can cross the galaxy in the blink of an eye, it would seem.