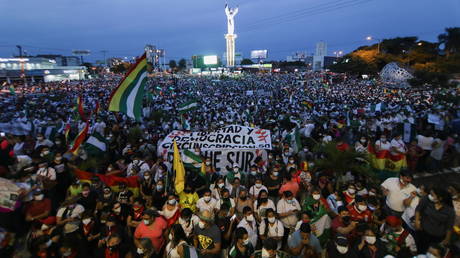 Huge crowds supporting Bolivia’s ex-president, Jeanine Anez, took to the streets across the country late on Monday to protest her arrest for being involved in a 2019 coup that deposed long-time leader Evo Morales.

The largest group gathered in the country’s financial capital, Santa Cruz, where the attendance was estimated at some 40,000.

“We will not abandon you,” governor-elect for Santa Cruz and Anez’s ally Luis Camacho said from a stage at the gathering. “We will be firm because this is going to be a strong fight.”

Protestors with Bolivian national flags also marched in the country’s highland capital La Paz. They chanted slogans: “[President Luis] Arce, be careful, the people are angry,” and “Freedom for Anez.” The event went on amid a large police presence, but the officers made no apparent attempts to prevent the participants from expressing their stance.

“We are asking for the same justice for everyone,” one of the demonstrators told RT’s Ruptly video agency. “Just as they judge the transitional government [on Anez] that was constitutionally put in place, we demand that the government of Evo Morales and all his henchmen also go to jail.”

A few hours before the rallies, Anez was transferred to a prison in La Paz. The conservative politician, who ruled Bolivia as interim president for a year, and several of her associates were detained during the weekend on accusations of sedition, terrorism and conspiracy over their coming to power in November 2019.

At the time, Morales was forced to flee the country amid a violent uprising, which was triggered by accusations of election fraud that later turned out to be largely baseless. The Anez government harshly suppressed the counter-protests, even giving the military temporary immunity from prosecution over its actions during the demonstrations.

Morales, who led Bolivia for 13 years, has maintained strong public support in the Latin American state, with his leftist Movement for Socialism (MAS) party winning the general election last November and new president Luis Arce vowing to bring the coup plotters to justice.

Anez herself has denied any wrongdoing or even that there was a coup in the country, calling her arrest “abuse and political persecution” on the part of the new authorities.