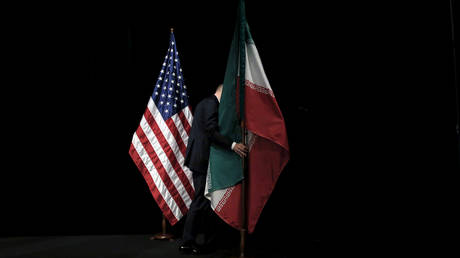 Iranian President Hassan Rouhani has sent a stern warning to hardliners seeking to derail the country’s quest to get rid of the US sanctions. He himself is set to leave office after an election in June.

“It is a great betrayal of the Iranian nation if any faction or person delays the end of the sanctions even for one hour,” Iran’s President Hassan Rouhani said in a televised speech on Wednesday. He added that those interfering in the lifting of the sanctions will be painted with “eternal disgrace” in Iranian history.

The small minority that is obstructing this path needs to stop its destructive act. If it stops … the government can break the sanctions.

Rouhani noted that the US under President Joe Biden has previously indicated a willingness to return to the landmark multinational 2015 deal on the Iranian nuclear program, known as the JCPOA, which was abandoned by Biden’s predecessor Donald Trump.

“Today, conditions are better than ever for the lifting of the sanctions,” Rouhani said, stressing that the Americans must make the first step. “Words are not enough. We are waiting for action.”

Rouhani made his comment ahead of a presidential election, which is scheduled for June 18. He himself is barred from seeking a third term in office.

Iran’s Foreign Minister Mohammad Javad Zarif warned on Monday that Washington does not have much time left to lift the sanctions and join the deal before the crucial vote. After the election, a lame duck government in Tehran will not be able to “do anything serious” for around six months, he warned.

US Secretary of State Antony Blinken, meanwhile, stated earlier this month that Washington will not provide any “concessions” to Iran before the talks on salvaging the JCPOA begin. “I think the ball is in their court to see if they are serious about engaging or not,” he said.

Under the JCPOA, Iran agreed to severe restrictions to its nuclear program in exchange of the lifting of some of the international sanctions. The deal began falling apart in 2018 when the US left it while accusing Tehran of secretly violating the agreement. Iran denied the allegations, and the global nuclear watchdog, the International Atomic Energy Agency confirmed that the Islamic Republic was following the deal.

The Trump administration re-imposed old sanctions on Iran and rapidly began introducing news restrictions, targeting the country’s oil trade and financial sector, among other things. Iran responded by gradually ramping up the production of enriched uranium.

Iranian officials insist they will return to full compliance with the JCPOA once the US lifts the sanctions and officially rejoins the deal. Washington says that Iran should be the one to return to the agreement first.