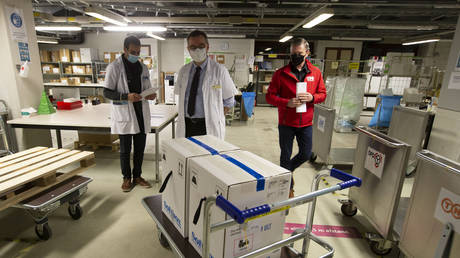 The European Commission (EC) president has warned it could block vaccine exports “to countries who have higher vaccination rates than us,” and describes the slow rollout and rise in Covid as “the crisis of the century.”

Ursula von der Leyen made the comments as she spoke to reporters on Wednesday, declaring that the EU will work to protect its own citizens as cases soar in parts of the bloc, forcing nations to consider and implement new lockdowns.

Warning that the EC is “ready to use whatever tool we need” to increase the speed of the vaccine initiative across its member states, Von der Leyen again raised the threat of using recently approved provisions to block exports of doses to countries that produce vaccines themselves or have a higher inoculation rate.

“If this situation does not change, we will have to reflect on how to make exports to vaccine-producing countries dependent on their level of openness,” she said, adding that any further restrictions would require the EC to “reflect on whether exports to countries who have higher vaccination rates than us are still proportionate.”

We are in the crisis of the century and I am not ruling out anything for now.

Refuting criticism of measures that limit vaccine exports, Von der Leyen highlighted how 314 authorization requests had been made to the EU so far, with only one being denied. That one refusal was for a shipment of more than 250,000 doses that was due to go from Italy, a country facing a third wave, to Australia, a nation that’s managed to contain the outbreak.

While the EC’s focus is on limiting exports out of the continent, some European nations have called on the bloc to address “possible gaps in the vaccine distribution between member states,” suggesting it has been unfairly weighted so far.

Austria, Bulgaria, Croatia, the Czech Republic, Latvia, and Slovenia joined together to call on the EC to ensure all members were treated equally in vaccine distribution, without explicitly naming which states they think have received preferential treatment.

While the EC’s blockage of the shipment to Australia was met with understanding by politicians in Canberra, a similar attempt to hinder such exports to the UK sparked anger in Northern Ireland, and concern in Dublin and London.

In January, the EC moved to invoke Article 16 of the Brexit Withdrawal Agreement to limit vaccine deliveries to the UK in what was described by some Northern Irish politicians as “an incredible act of hostility,” before reversing the decision.