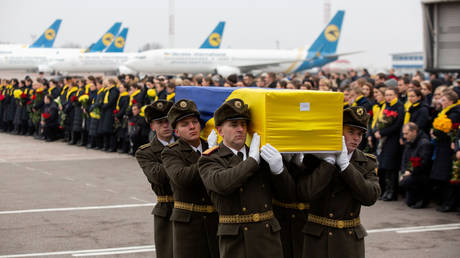 The downing of Ukraine International Airlines Flight 752 was caused by the mistake of an Iranian air defense operator, poised for attacks in the wake of the killing of General Soleimani, Iran’s civil aviation body has said.

All 176 passengers and crew died in the incident in January last year, when the plane was hit by two missiles after it was wrongly identified as a hostile target, Iran’s Civil Aviation Organization said on Wednesday, in its final report into the crash.

“The plane was identified as a hostile target due to a mistake by the air defence operator…near Tehran and two missiles were fired at it,” the report said.

It clarified that those operating the aircraft were not in the wrong, however, and that the accident had been caused by the detonation of SA-15 “Gauntlet” missiles, which can hit a target with up to 3,000 pieces of shrapnel from a single warhead.

On January 8, 2020, the aircraft was shot down by Iran’s Revolutionary Guard Corps over the suburbs of Tehran shortly after the flight took off from the city’s Imam Khomeini International Airport.

As the report states, earlier that same day Iran had launched a missile attack on US forces at Iraq’s Al Asad air base, in response to the assassination of Iranian commander Qassem Soleimani, who had been killed in a US drone strike five days earlier close to Baghdad Airport.

Iranian air defense systems were therefore placed on a “higher level of alertness” amid a potential retaliatory attack from the US, the report says.

The strike on Soleimani, who’d commanded Iran’s elite Quds Force, had been authorized by then-US President Donald Trump, in what American security officials said was a bid to prevent attacks on American troops and diplomats in Iraq.

Ukraine’s Foreign Minister Dmytro Kuleba slammed the Iranian report on Flight 752 as a “cynical attempt to hide the true reasons for the downing of our plane.”

In a Facebook post, Kuleba said Iran had failed to take responsibility for ensuring such a tragedy could not happen again, instead presenting biased findings and deceptive conclusions in their report.